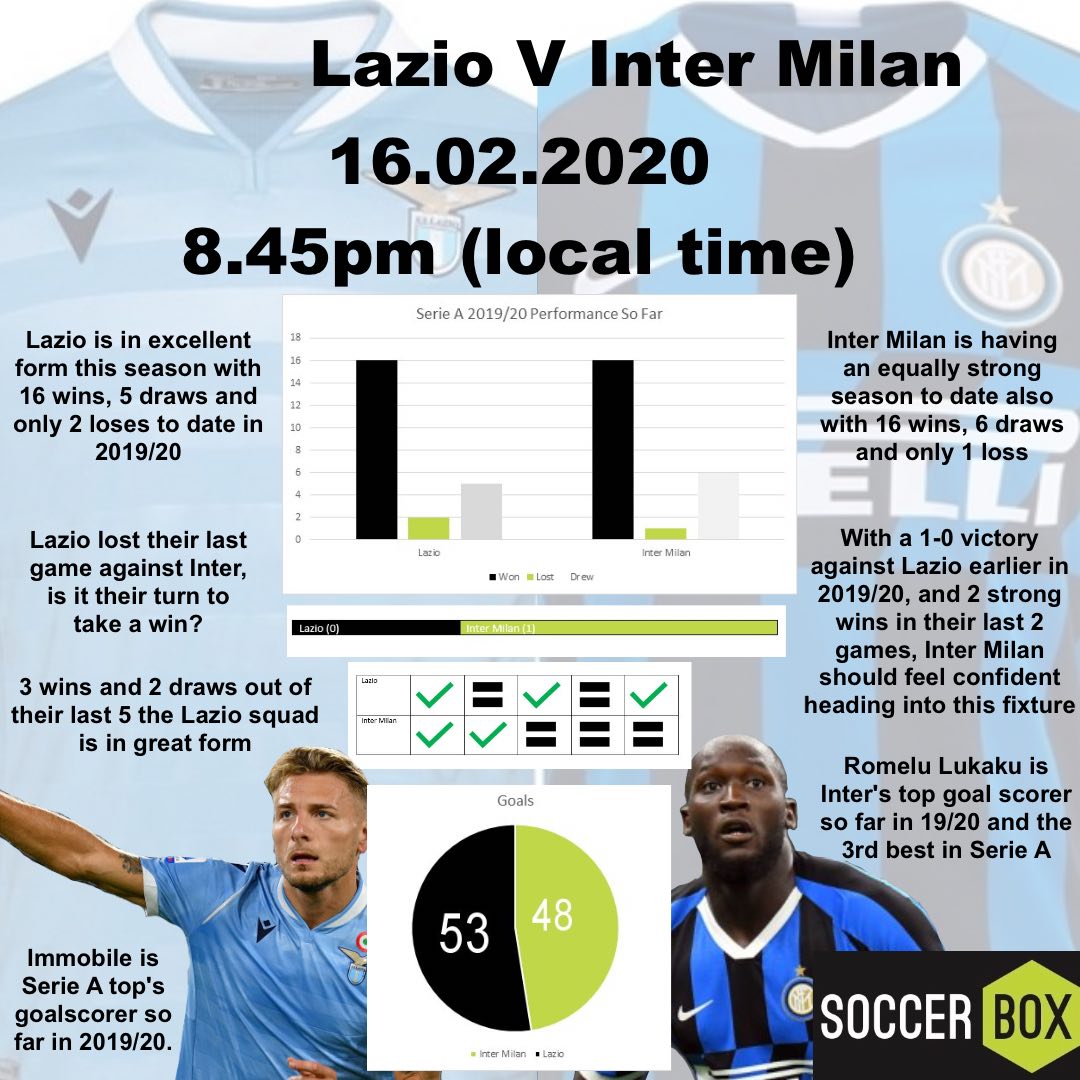 Currently in the top rankings of the Serie A, Lazio and Inter Milan go head to head this weekend on the 16th February. And in advance of this fixture, we are going to explore the performance of both Italian soccer teams in order to try to work out how the match will pan out. So, if you want to find out more about the current standings of these top Serie A clubs, then keep on reading.

Lazio’s Current Performance in the Serie A

Lazio have done considerably well this season to remain in the top 3. They are currently in the third position in the table at the moment with Juventus and Inter Milan only slightly above them. In this part of the post we are going to look at how Lazio have performed so far in the 2019/20 Serie A.

To start off with, we have broken down their results from the past five fixtures in this season’s tournament:

Looking at this breakdown we can get a great insight into the form of the squad at the moment. They have managed to secure three confirmed wins and two draws out of the last five games. This is an impressive statistic as they haven’t lost a match recently. In fact, the last match Lazio lost was against Inter Milan on the 25th September 2019 where they lost 1-0. In total Lazio has lost only 2 games out of the 23 matches they have played. They have won 16 and drew 5 times too.

As a result of this, we can tell that Lazio is certainly on top form at the moment. But considering one of their losses this season was against Inter Milan, could they turn it around in their second match against them this weekend?

Next, we are going to see how many times historically Lazio has lifted the Serie A trophy:

As we can see, Lazio have only been able to secure a top place win twice since they joined the league 77 seasons ago. But judging by their performance at the moment as they are third in the league table, could this season be their third trophy win?

Inter Milan’s Current Performance in the Serie A

Above we have looked into the current performance of Lazio, but now we are going to explore Inter Milan’s progress during the 2019/20 Serie A season. Within this part of the post we have broken down the results of Inter Milan’s past five matches in the tournament which helps us work out how the club is doing at the moment:

As we can see in the breakdown above, Inter Milan has won two out of five matches and drew in three. Out of this season on a whole, Inter Milan is currently in the top spot and have only lost one match which was against Juventus on the 6th October 2019 where they lost 2-1. Considering they have only lost one match out of 23 played, they are most certainly on top form this season.

Next, we are going to look into the past first place wins for Inter Milan in the Serie A since they joined the league 88 seasons ago:

Inter Milan, also known as Internazionale, have lifted the Serie A trophy 18 times in total and have been runners up 14 times. The last winners were Juventus, but as Inter Milan are ranked above them at the moment, could this be another win under Inter Milan’s belt?

After we have explored the overall performance of both Lazio and Inter Milan, now we are going to identify the key players from each side who are leading the teams to greatness. In this part of the article we are going to look into the current performance of Lazio and Inter Milan players who are at the top of the rankings for their goals and assists tallies.

Previous Serie A Head to Heads

Lastly, we are going to look into the previous head to heads between Lazio and Inter Milan across the past five seasons. This allows us to gauge an idea on how they perform when against one another in the Serie A tournament overall. Here is the breakdown of each result:

In the bullets above we can see that the previous results of Lazio V Inter Milan in the Serie A tournaments have been relatively close. Lazio have won three times whereas Inter Milan has won five times. Along with this, they have only tied once where neither side was able to secure a goal. Judging by these results, and previous years, we could expect Inter Milan to take the win this weekend, or Lazio could be a dark horse and sneak the win.

How Do You Think the Match Will Go?

Throughout this post we have explored all areas of Lazio and Inter Milan’s performance this season. Due to this, we are able to try and get a better idea on how the match at the weekend will go. Who do you think would emerge victorious after their head to head? Let us know over on our social media pages today. And don’t forget to grab a Lazio jersey or Inter Milan shirt from our online store – Soccer Box and pledge allegiance to your favourite side ahead of the fixture.