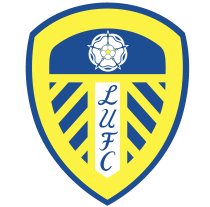 Leeds United’s greatest accomplishments are associated with their all-white kit. When in 1969 they won the English top flight for the first time in their history, they wore all white. When they repeated the feat decades later, in the season preceding the First Division’s rebirth as the Premier League, they wore all white. And, when they reached the final of the European Cup in 1975, and the semi-finals of the UEFA Cup in 2000 – you guessed it – they wore all white. But it wasn’t always this way.

It will be hard for any true Leeds fan to read this, but the club’s initial colours were blue and white and based on Huddersfield Town’s design. This link came about through Hilton Crowther, the former chairman of Huddersfield who went on to become a key figure in Leeds’ formative years. His idea was for the two sides to join forces; when this ambition was scuppered, he left the Terriers and became chairman of Leeds.

The club wouldn’t wear an all-white kit for the first four decades of their existence. Well after Crowther had moved on, they continued wearing blue and white before switching to a blue and gold half-and-half number. Various iterations of this
colour combination remained in place until the appointment of Don Revie, a manager keen to shake things up on and off the pitch, in 1961.

Revie thought differently to most of his peers, perhaps because he was forced to as a player. During his time at Manchester City in the 1950s he was the key man in manager Les McDowall’s experiment, which later became known as the ‘Revie Plan’. Inspired by the great Hungarian national team of the era – a side built around a unique positional fluidity – McDowall gave Revie license to drop deep from his centre-forward position, with the intention of dragging markers with him, as opposed to acting as a purely central hitman.

With his playing career defined by a controversial tactical innovation, Revie was unafraid going into management. He was eternally willing to push the boundaries, and his first bold decision came when opting to change the Leeds kit from blue and gold to all white. At the time, Leeds were struggling in the English second tier, but Revie found fashion inspiration at the highest echelons of the European game.

Success in a White Kit

In the mid-1950s and early 1960s, Real Madrid were the finest football team on the continent. Any debate over their status was consistently and decisively quashed as they won five consecutive European Cups. Disposing of the best France, Germany and Italy had to offer, they were a multinational amalgamation of legendary individuals, including Alfredo Di Stefano, Ferenc Puskas, Francisco Gento and Jose Santamaria.

The idea that an English Second Division team would even think to emulate them in any way was, at best, laughable. Yet Revie had no problem setting such high standards, even at the very beginning of his time on the touchline. And, within three years, it became clear that his confidence was underpinned by genuine managerial nous.

Among the first players to play in the new kit were Billy Bremner, Jack Charlton, Norman Hunter and Paul Reaney. Every single one of this quartet would go onto play a vital role as the club became a major force in English football and beyond. In 1964, they were promoted to the First Division. Five years later, they won the First Division. The results were a testament to Revie’s motivational skills and willingness to build around young talent. However, while major silverware made its way to Elland Road, negative perceptions of the team abounded.

The Changing Image of Leeds United

Their kit may have been pristine white, an image of purity, but their football was branded ‘dirty’. Leeds gained a reputation for harsh tackles and, worse still, gamesmanship. They weren’t just rugged in their approach; they were cunning too.
For all their success, they found it difficult to shake the label. Their all-white outfit came to be imbued with a rich irony.

But there was so much more to Revie’s Leeds than a sheer will to win by any means necessary. They were also extraordinarily gifted on the ball, something that was evidenced best in their 7-0 hammering of Southampton in 1972. On that day, a team associated with Catenaccio-style tactics showcased something more akin to Total Football, passing their way around utterly helpless opponents. Towards the end of the match, they completed 39 passes unanswered. “It’s almost cruel,” commentator Barry Davies remarked.

This was what Revie had aimed for in the early stages of his tenure. The Real Madrid of the 1950s had bigger names, but he built a Leeds side of real class. Bremner was pugnacious, but he also formed a dynamic playmaking partnership with Jonny Giles. On the left wing, Eddie Gray was the team’s very own Gento, a flamboyant but efficient dribbler who once nutmegged George Best during a 5-1 thrashing of fierce rivals Manchester United. Defensively, Hunter – nicknamed ‘Bites Yer Legs’ – combined solidity off the ball with sound distribution when in possession.

The individual quality of these players was undoubted, though the influence of Revie was integral. He was a manager obsessed with progress, leading his team with acuity, sensibility and a regard for detail. So intense was his obsession, he went beyond tactical organisation to further the club’s chances of success.

Clearly not content with simply overhauling the kit, he went about changing the Leeds badge. A superstitious man who counted issues with birds among his many foibles, the owl crest introduced in 1964 was never going to last long. In its place came a stylish LUFC script crest that epitomised his side’s subtle beauty. Then, in the 1970s, perhaps realising how hard it was to alter ingrained public perception in an age long before social media, he introduced what became known as the ‘smiley’ badge – a funky combination of the letters ‘L’ and ‘U’ – in a bid to foster a more positive image of his team.

The badges have changed many times since – the most recent version receiving universally negative reviews and petitions demanding a re-think – but the all-white home kit remains in place. In that sense, Revie’s ideas, innovations and ambitions are still present every time Leeds step out to play at Elland Road.

This article was written by Blair Newman exclucievely for Soccer Box where you can shop for a wide array of current, official football shirts, kit and accesories.