The Lille Olympique Sporting Club is making a real play for the championship title in France's Ligue 1 division this season, and 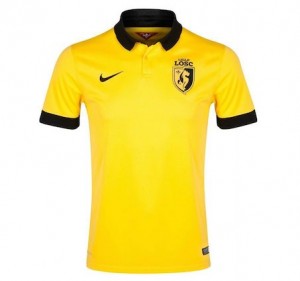 what better way to celebrate that fact than with a brand new version of the Lille football jersey? The club went back to the drawing board this summer as far as uniforms were concerned, ending a contract with kit manufacturer Umbro and signing with Nike instead. Nike has since injected some new life into the Lille soccer jerseys, including a bold and bright reimagining of the team's away shirt.

Indeed, the Lille away shirt 2014 2015 is a major departure from every other away jersey that the Lille squad has ever worn. Where last year's away shirt really just inverted the white on red design of Lille's home shirt, this year's version sees Lille throwing new colors into the mix: yellow and black. You can find the shirt today on Soccer Box's web store!

The Away Shirt Redesign

The new design is a surprising one for a club that, like so many others in the soccer world, has always relied almost solely on the classic red and white color scheme. The new away Lille football jersey looks great, though, with a predominantly yellow design graced by stark black trim. Even Lille's famous red, white, and blue Great Dane crest is visualized as a shadowy black logo.

Needless to say, the new Lille away shirt 2014 2015 is a stunning new design and a must-have item for big fans of the Lille Olympique Sporting Club. The shirt doesn't sacrifice comfort for aesthetic appeal, either. On the contrary, Nike's trademark Dri-FIT technology is applied to the shirt, so you stay cool and dry even when exerting yourself, and the jersey's classy polo collar is a comfortable alternative to the more common crew and V-neck styles used on most soccer jerseys these days.

While this year's brand new away shirt is certainly the highlight of Soccer Box's Lille OSC shop, the new version of the club's home jersey also deserves a look for fans of the team. The shirt isn't a major departure from last year's home jersey. After all, the basic white on red color scheme is still in place.

Nike has, however, streamlined the design of the new Lille football jersey to offer a sleeker and more modern look. At a glance, the shirt merely looks like a plain red V-neck jersey. Look closer, however, and you will notice a subtle V-shaped pattern design, running down the middle of the shirt from the V-neck. It's a cool design flourish, and it brings the Lille football shirt design into a new era without sacrificing the look that has defined the shirt for years.

On the contrary, it seems like the Lille Olympique Sporting Club is more focused than it has been in years. Part of that has to do with manager Rene Girard, who came aboard with the club in 2013 after a disappointing sixth place finish on the 2012 2013 Ligue 1 table, and helped the team jump back into the top three.

This year, Girard and his squad definitely have plans to return Lille's name to the top of Ligue 1 for the first time since the 2010 2011 season. With a strong season opening in Ligue 1, not to mention the impressive pre-season play that Lille displayed to audiences, Lille OSC is certainly a club to watch as a potential spoiler for Paris Saint Germain's hopes of netting a third consecutive Ligue 1 title.

Do you think Lille has what it takes to translate this year's strong season opening into season-long consistency? If so, grab a new Lille football jersey from Soccer Box.