Last year, Lille OSC switched kit designers, moving from Umbro to Nike for a few of its most stunning football jerseys ever. This year, Nike has launched yet another redesign of the Lille football shirt, keeping elements of last season's home jersey the 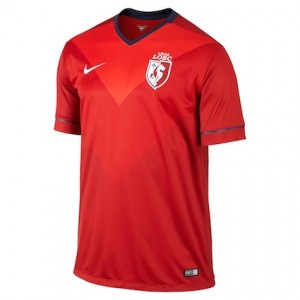 color scheme of red with blue trim but adding a subtle triangular pattern down the center of the shirt. The triangles perfectly accentuate the V-neck of the soccer shirt.

In fact, the new Lille jerseys look so good that you won't just want to get one for yourself. You'll want to get a few for your son and daughter as well. Luckily for you, Soccer Box currently has stock of both adult Lille shirts and the Lille kids home jersey 2014 2015.

The kids Lille football shirt is an exact replica of the shirts that Lille's players will be wearing on the soccer pitch this year. The only difference is that the jerseys have been miniaturized to fit younger and smaller sports fans!

Back to the Top?

Your children will love having and wearing the Lille kids home jersey 2014 2015, especially if this year ends up marking Lille's return to the top of France's Ligue 1 division!

All of the elements are in place for the rise of Lille back to the top. For one thing, it hasn't been so long since Lille won the title. During the 2010 2011 season, Lille amassed a great record of 21 wins, 13 draws, and just 4 losses, handily claiming the Ligue 1 trophy over other top French clubs like Marseille, Lyon, and Paris Saint Germain.

The years since have also been kind to the Lille football shirt, at least for the most part. In 2011 2012, the title went to Montpelier, which made an astounding jump from a losing record (and the 14th place position on the Ligue 1 table) the year before.

Paris Saint Germain took the second place slot while Lille finished in third, but Lille's record was not any weaker than it had been the year before. Indeed, in a less competitive season, Lille's 2011 2012 record of 21-11-6 might have netted the club a second consecutive win.

Lille's next season wasn't as solid. The 2012 2013 season saw Lille drawing 14 of its matches, losing 8, and only winning 16, a disappointing record that dropped the club to sixth place on the Ligue 1 table.

The upsetting performance led to the departure of Lille manger and former player Rudi Garcia, who had been at the helm of the team since 2008 and had led Lille to its first Ligue 1 titles since the 1940s. Garcia chose instead to head to Roma for new coaching challenges.

To replace him, Lille sought Montpelier manager Rene Girard, who helped inject some fresh life into the squad, and Lille finished last season, the 2013 2014 year, back in third place on the Ligue 1 table.

In the two seasons where Lille fell and then rose back up the Ligue 1 table, Paris Saint Germain has been building a dynasty of sorts in French soccer. The club has now won two Ligue 1 titles in a row and is gunning for the hat trick this season.

Currently, Lille is floating around near the top of the Ligue 1 table alongside the likes of Bordeaux and, of course, Paris Saint Germain. Thus far, Lille's only major challenge has been Monaco, the team which ended last year's season as the runner-up. The match between Lille and Monaco ended in lukewarm fashion for both teams with a draw.

Lille also won't face its biggest challenges for a while still, which could give the team a good chance to continue climbing the Ligue 1 table. For instance, your kids will have to wait until December 3 to don their Lille kids home jersey 2014 2015 and root for a Lille victory over PSG. That match will likely prove to be the biggest Lille home match of the year.

Do you think Lille can triumph over PSG and the rest of the Ligue 1 competition to win the title? If so, stop by Soccer Box today and buy a Lille football shirt to show your support. And don't worry about the cost of buying shirts for yourself and your children.