Looking Back at the Bayern Munich Kits

Bayern Munich is a very strong soccer team in the Bundesliga and has lifted the trophy 28 times which is very impressive. Most recently they have won the Bundesliga champions title six consecutive times and this makes them such a popular squad to watch and through this they have earnt a strong following. So there is no doubt that the Bayern Munich kit releases are heavily anticipated. And in celebration of their successes we are putting this article together to have a look back through all of the previously worn home shirts worn by the players. Along with this we will also acknowledge notable away and third jerseys which have been a hit with supporters.

History of the Home Colour Scheme

When the Bayern Munich football club was first established, under the constitution their colours were named as white and blue. However, they actually played in white tops and black bottoms up until they joined the MSC in 1905. And from then on the MSC stated that the players would have to wear red shorts, which they took great dislike to. This is because ‘red shorts’ was a common insult which was given to younger players which indicated their lack of experience.

Moving on from this, over the years they have experimented a lot with the appearance of their home kit, which makes keeping up with their history very intriguing. As of the 1968/69 season the squad then adopted red and white striped jerseys and blue shorts and socks as their home kit. And they also tested the waters with donning their red and white shirt with red or white shorts and red socks too for a couple of seasons after this. But as a shocker they decided to do a 180 and change the whole look of their home strip in 1973/74. This is when the squad wore an all-white kit with vertical red and blue stripes displayed on their top.

Along with all of these changes to the appearance of the home attire, they have also experimented with a blue base colour with red and white accents too. And as of the early 2000s they have been consistent with their red home top but have made subtle changes to the styles and patterns used on their soccer clothing.

Bayern Munich has had their home, away, third and training sportswear collections all produced by Adidas for over 50 years now. Continuously extending their contract, we can most certainly see a strong level of commitment between the sports clothing brand and the soccer team, which is something you don’t see very often as clubs are regularly switching things up. Although they have remained with the same company for over half a century, Adidas has made a conscious effort to move with the times when it comes to styling the player’s kits. And because of this, fans also have special trust with Adidas for manufacturing top quality goods.

Recently after Bayern’s latest Bundesliga win in the 2017/18 season, Adidas seized the chance to update their already ongoing contract a further 10 years. As they are currently within their previous extension, this added another decade onto their end date, which will more than likely be extended closer to the time. Therefore we are expecting to see them work together for a very long time, as this agreement at the moment is due to take them up to 2030. Reportedly costing 900m Euros, this extension to the contract is among one of the most costly partnerships ever seen for the club and the manufacturer. 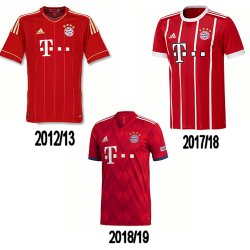 Now we have explored the history behind their classic home colour scheme, now it’s time to acknowledge the most impressive Bayern Munich home shirts which have ever been produced. We normally find that football strips are proven to be most popular when the team has had a significant win, although this is correct for some of these soccer t-shirts listed below, we know that a few have also been lusted after purely for the intricate appearances:

Sporting the signature red base colour, the 2012/13 home jersey also features white and gold accents which are a unique choice for the FCB shirts. Boasting extremely thin intricate vertical stripes, this garment holds a significant memory. This was the fact that the squad won the UEFA Champions League during this season.

The 2017/18 home shirt produced by Adidas took an interesting approach when it came to the styling of the signature red, white and black colouring. For this jersey they chose a red base colour with thin white stripes and piping on the sleeves. And the T-Mobile sponsorship was placed across the chest in white font with a black outline which just pops against the red. Fans adored this style as it was a first for the top to feature thinner vertical lines. This top also holds great significance as the team won the Bundesliga for their 6th consecutive time during this season.

Produced for the latest season, the Adidas 18/19 Bayern Munich home shirt is also a signature garment for supporters. This is because they have stepped outside of the box when creating the appearance of the kit. Instead of sticking to the same style year after year, for 18/19 they have wowed fans with a stylish and modern zig-zag pattern across the shirt which really makes the red base colour come to life through its multiple tones. Complete with white accents and navy sleeve piping, this jersey has most certainly impressed. 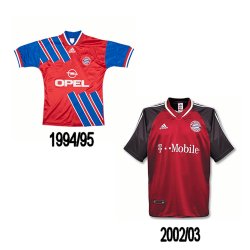 Although Adidas has produced a range of beautiful jerseys for the Bayern Munich squad, they have also had a few which did not prove to be popular with the fans. Therefore within this section of the blog we will take a look at the least impressive home shirts for the German football team and these are listed below:

Supporters felt that the home shirt designed for the 1994/95 season was very distracting. Although they stayed on point with the red, blue and white colour scheme of the Bayern Munich home sportswear, fans did not take warmly to this style. The red base colour and white accents were overshadowed by the excessive use of blue on the sleeves and on the front of the top. Horizontal blue stripes are displayed on the garment which showcases the signature three stripes of the manufacturer. As Adidas usually stuck to the simplistic designs, this was definitely a shock for fans to see.

For the 2002/03 home jersey Adidas decided to change the shade of red from the striking base colour known and loved by fans, to a darker colour called ‘Bordeaux Rot’. This mixed with the grey tones used in the dark sleeves left supporters feeling disheartened to watch their idols take to the pitch in this kit.

Notable Away and Third Bayern Jerseys 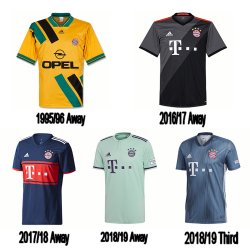 Along with home shirts, the Bayern Munich squad members also wear away and third jerseys to fixtures which require them to safely stow away their infamous red shirts. With red being a prominent colour for the home tops, the manufacturers can get more creative when producing the away and third looks. As a result of this you are guaranteed to get a number of kits which have been hits as well as complete misses. Therefore in this section of the article, we will look into these following notable away and third jerseys:

For the 1995/96 season the away jersey produced by Adidas for Bayern Munich was not a hit with fans. This was purely down to the colour combination choice which left supporters feeling deflated. Replicating the colour scheme of Nottingham Forest, this jersey features a golden base colour with black and green stripes which did not represent the signature style of FCB.

The football shirt worn by the Bayern Munich players for away fixtures during the 2016/17 season was a very surprising hit. Combining grey and orange into a sleek and stylish kit made fans very sceptical, however Adidas did a superb job of producing this effective kit using their unique colour scheme.

The away apparel produced for the 2017/18 season was a favourite with supporters as it paid homage to a kit worn by the team 20 years prior. Featuring a navy base colour with red sleeve piping and striped banner across the front, this looks remarkably similar to that of the 1997/98 home strip.

Green has not been seen on the Bayern Munich kits since the 90s, and for the 2018/19 away kit they decided to bring it back in a modern and unique way. This jersey features a light green base colour with subtle purple accents. These colours just work together magnificently and paired with the buttoned crew neckline, this top is a firm favourite with supporters.

The third football clothing for the 2018/19 season also makes the list of notable jerseys as they have introduced a creative pattern with an environmentally friendly design. This top features a multi-tonal grey dotted texture for the base and has white accents adorned to the front. But the interesting thing is, is that Adidas produced these tops in partnership with Parley for the Oceans to create sustainable sportswear. And to do this, they have sourced a high number of plastic items from beaches and shores and re-purposed them for use in polyester, therefore preventing the containers from entering the ocean and harming marine life.

Your Thoughts on the FCB Sportswear

Throughout this article we have explored the various football jerseys worn by the Bayern Munich squad over the years. Discussing the best and worst home shirts along with notable away and third sportswear, we have explored the different styles produced by long term manufacturers – Adidas.

However, now we want to know what kits you like the most for the Bundesliga team. Get in touch with us over on social media and tell us your thoughts on this post. You can also shop our range of Bayern Munich football shirts over on our online store – Soccer Box. Feel like part of your favourite squad by donning their latest or classic soccer apparel to their future fixtures in the top flight German soccer league.