It was a good weekend at Etihad Stadium, where Manchester City packed the stands with fans in the Sky Blue home shirt and satisfied those fans with a resounding 5-0 victory over Newcastle United. It 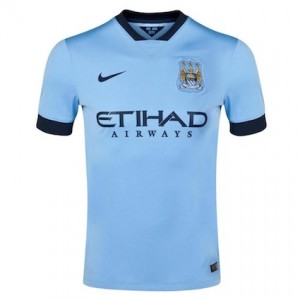 was the club's biggest victory of the entire 2014 2015 Premier League season, and one that helped revitalize hopes that Man City could win another title this year. Celebrate the triumph and root for the football team's title chances by checking out our selection of Manchester City gear at Soccer Box.

Whether you are looking for a sky blue Man City home shirt 2014 2015, a dark blue Nike away shirt, or even a green goalkeeper jersey, Soccer Box is the place to find it. Our stock of football club gear also includes kids kits, training shirts, soccer balls, and other fun Manchester City accessories. Visit us online today!

Newcastle's football club has been somewhat of a wildcard throughout the 2014 2015 season. On the one hand, the team has scored key victories against the likes of Chelsea, Liverpool, and Tottenham Hotspur. On the other, they've been inconsistent, especially since the start of the New Year the Magpies' lone win since the start of January came in a 3-0 away fixture with Hull City.

As fans arrived at Etihad Stadium for Saturday's match, decked out in Manchester City gear, most fully expected the Sky Blues to achieve a big win. After all, Newcastle was the first team that the Sky Blues faced in the 2014 2015 Premier League-an August away fixture that they won 2-0. With the home field advantage on the Manchester side, fans of the club were hoping for an even bigger margin of victory.

That's precisely what they got. The wearers of the Man City home shirt 2014 2015 dominated the match almost literally from the start. The home side took the lead just two minutes in thanks to a penalty goal from Sergio Aguero.

Aguero's goal kick-started an avalanche of successful scoring opportunities for the Sky Blues, with goals from Samir Nasri and Edin Dzeko putting the home team up 3-0 just 21 minutes into the match. After that, Man City didn't score again for half an hour, but the soccer club's defensive lineup made sure that the Magpies didn't either.

The second half, like the first, started with a bang. At the 51-minute mark, attacking midfielder David Silva netted his first goal of the match. He scored a second just two minutes later, after which Manchester was pretty much able to coast until the end of the match. The final score was 5-0-a proud day to wear Manchester gear.

So what does this big victory mean for the Sky Blues and their chances of finishing at the top of the 2014 2015 Premier League? Is it time to start collecting Manchester City gear for a second consecutive come-from-behind football league victory?

Frankly, it's hard to say. Beating the Magpies five to nothing certainly gives the wearers of the Man City home shirt 2014 2015 a nice boost-both in terms of standings points and goal difference. And since Chelsea-the current point leader in the division-had to settle for a 1-1 draw with Burnley this weekend, the win definitely allowed Man City to take a bite out of the club's lead.

Still, Chelsea is up five points on the 2014 2015 Premier League standings table. And with the weeks dwindling until the end of the season (26 of the 38 matches have been played), Man City might just run out of time to usurp the top spot.

With that said, if there's any team that can upset the status quo late in the season, it's Manchester City. Last year, the team was in third place until the 36th week of competition. But with five wins in a row to close out 2013 2014 play, the Sky Blues were able to slip past both Chelsea and Liverpool to claim the trophy.

Root for a repeat occurrence in 2014 2015! Stop by Soccer Box today and check out our extensive selection of Manchester City gear. Prepare for games at Etihad Stadium with a 2014 2015 home shirt, root for the great Joe Hart with a goalkeeper shirt, or stay warm with a new Man City jacket.