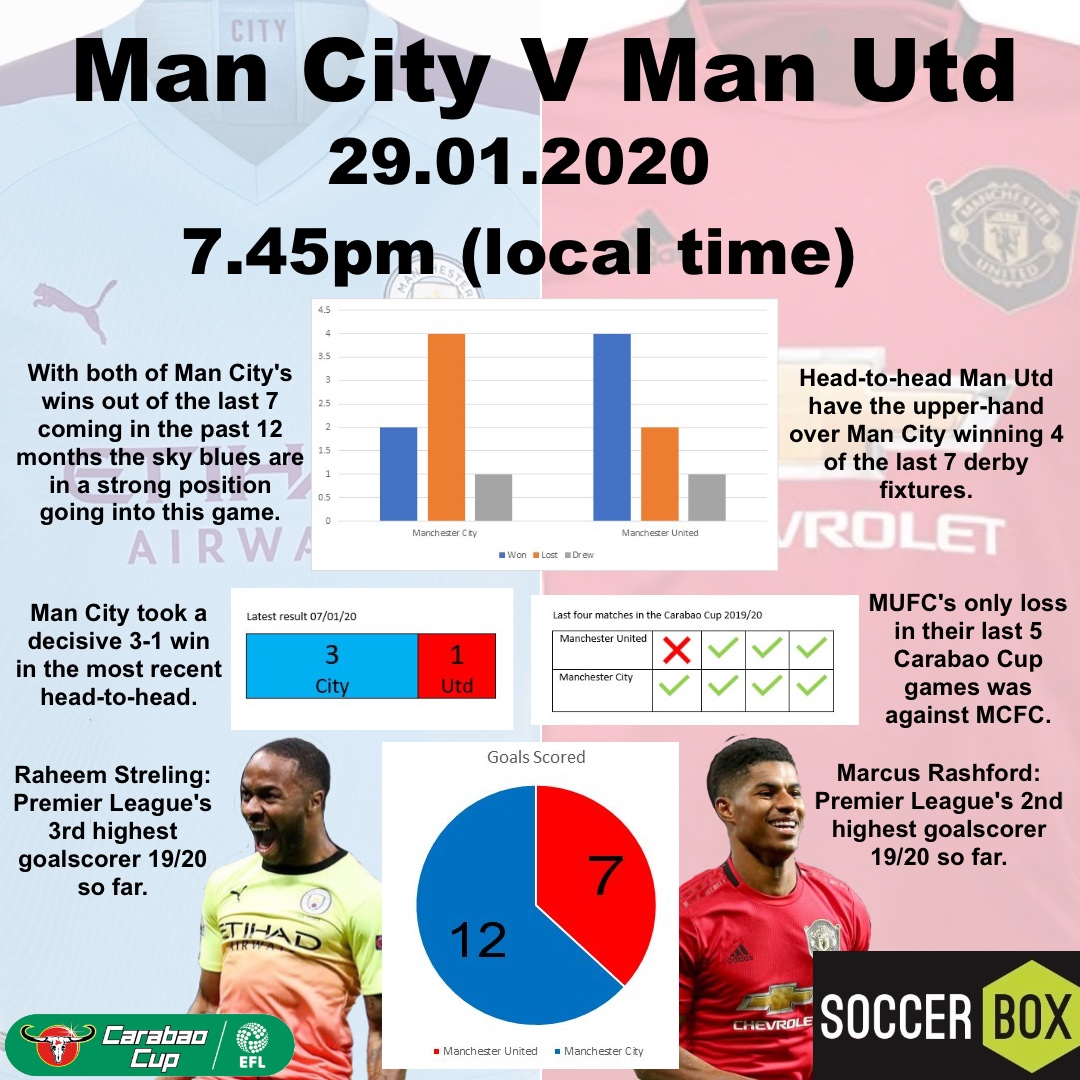 This week the two Manchester based football teams go head to head in the Carabao Cup. These two clubs are the closest of rivals as they split allegiance. Within this article we are going to explore the performance of each of the team’s so far within the Carabao Cup tournament as well as their history of head to head matches. With this information we are going to try and predict the outcome of the match which is taking place on the 29th January. So, if you want to find out more about this upcoming match, then keep on reading.

First, we are going to delve into the performance of Manchester United now. Most well-known for the distinctive red colouring of the Manchester United home shirt, this soccer team has gained the love and support from fans worldwide in recent years. They have had a successful history in English football from the Premier League to the FA Cup and EFL Cup, there is no doubt that their support reaches across the UK.

Below we have analyzed the results of the past four matches which Manchester United has played so far in the EFL Cup:

We can see in the breakdown above that their most recent match was against Manchester City where they lost 3-1. And their next schedule is to play City again only three weeks after their previous defeat. Would this short gap between games be what United needs to rally around and build up motivation to beat City or is the loss still too fresh and will impact the squad’s morale during the game? There is only one way for us to find out.

Other than their match against City, United have done considerably well by winning against Colchester and Chelsea as well as securing a win against Rochdale after the draw caused a penalty decider. So, could this one loss with Manchester City be the motivation they need to up their game?

Now we have looked at their current performance in the Carabao Cup, we are going to see how they have done overall in this tournament over the years. Here is the breakdown of each year that Manchester United has won the EFL cup and who they faced in the final to get this achievement:

Manchester United’s most recent victory was in 2016/17 where they beat Southampton in the final 3-2. Prior to that, we can see that they mostly did well in the 90s/00s compared to recent years, but going by how they have faced the Carabao Cup so far in 2019/20, could a new title win be added to the list above?

Currently celebrating their 125th anniversary since they were first established, Manchester City is experiencing a year of ultimate morale from inside the club and its supporters. Manchester City have a strong history of being Champions in the UK and overseas soccer tournaments which makes their distinctive sky-blue Manchester City home shirt sought after.

To start off with we are going to see how the squad is performing so far this season in the Carabao Cup. The tournament is currently in the Semi-final stage which means that the efforts are high now to secure a place in the final. Here is the breakdown for the past four matches Manchester City has taken part in during this tournament:

In this breakdown we can see that Manchester City is going strong as they have consistently won each of their matches in the Carabao Cup 2019/20. Each match has seen them score three goals which means we could potentially be expecting a home run with a fifth turn out of three goals in their upcoming match against Manchester United. In their previous game against United, City had won 3-1, could a similar result to this be seen on Wednesday?

Next, we are going to analyze the achievements of Manchester City in the Carabao Cup overall. They are the most recent winners of the tournament after they beat Chelsea after they secured more penalties after their 0-0 draw. They have lifted the trophy at the end of the EFL a total of 6 times with two of those being consecutively after one another.

Key Players on Both Sides

Within each of these two Manchester clubs there are some high performing players which are currently making a name for themselves. Looking at the performance of each team this season within the Carabao Cup so far, we can see the following players standing out for City and United:

In this part of the blog post we are going to investigate the history of the clubs and how the results have faired when they have gone head to head. Covering both the Carabao Cup participation as well as the Premier League matches, we have broken down each match below:

Considering Manchester City has the most successful history when it comes to overall League wins, they are currently less successful whenever they have gone head to head with Manchester United. Their latest match together has seen Manchester City take the victory but prior to this they have lost to United 4 times out of the past 7 matches against one another. As they have started with a win this season, could this mean that City is motivated enough to give Manchester United a run for their money?

Manchester United has been considerably strong in the previous matches when going against City despite their intimidating trophy wins and Champions statuses. They have won 4 out of the 7 matches they have gone head to head in, but their recent meeting saw them take the loss to their rivals. Could this be the start of United’s downfall when it comes to playing against City?

What Do You Think the Outcome Will Be?

Throughout this article we have investigated each side’s history and current performance to try and predict how this Wednesday’s match will turn out. Now reading all this handy information, what are your thoughts on the game, do you think Manchester City or Manchester United will win the game? Let us know over on our social media pages and don’t forget that you can shop the official Manchester United and Manchester City shirts over on our online store – Soccer Box and pledge allegiance to your side in style!