It wasn't so long ago that Manchester United's Wayne Rooney apparently wanted to 'get away' from the Manchester United football club. However this was while working under Sir Alex Ferguson, there was quite an open-aired bust up between the two at the end of the season because Rooney was said to have requested a transfer away from United. Now that new manager David Moyes has arrived Rooney feels he has been given a new lease of life, he has done fantastically so far in the Manchester United home soccer jersey 2013 - 2014.

Wayne Rooney, aged 28 has been playing for the Reds since he transferred from Everton in 2004. Ironically it was David Moyes he played under at Everton, after 2 successful years in the blue shirt he wanted a change signed up to play in the Manchester United soccer jersey. 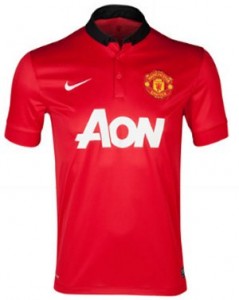 The striker was a favourite with the fans when he played for Everton after showing such great form match after match, he then became a favourite at Manchester United and so did Sir Alex Ferguson for signing him. He signed for the Reds aged 18 and was given the number 8 football shirt.

Everton football club snubbed a £20 million bid from Newcastle United and then went to accept United's £25.6 million pound offer.Â  At the time this was the highest paid fee ever for a footballer aged under 20 years old.

Throughout his Manchester United years Wayne showed some very promising games and to date he has scored 144 goals in 285 games which is very impressive.Â  He had a few off games in the Manchester United soccer jersey which was down to form or injury but this happens with all footballers.

It was the 2012 - 2013 season that you could see something was affecting Wayne on the pitch, his form was not the same and he was not the same outstanding striker 'Wayne Rooney' who we all knew. Was he bored of wearing the Manchester United soccer kit?

In 2012 - 2013 Sir Alex Ferguson signed Robin Van Persie from Arsenal on the 17th August for £22.5 million with an extra £1.5 million on top if United won a Premier League or Champions League title within the next four years.

RVP proved to be a fabulous signing for the manager and club, he then became part of SAF'S starting 11 plans most weeks leaving Rooney to watch from the bench. Rooney did however suffer a bad injury which also kept him out for a couple of games.

Throughout the rest of the 2012 - 2013 season Rooney played games on and off and at the end of the season Sir Alex Ferguson made an announcement that Rooney had handed in a transfer request as well as refusing to play for the team against their last game of the season against Swansea City.

No one was really aware of the truth or what was going on, all we knew was that we thought Rooney no longer wanted to play in the Manchester United soccer jersey. It stayed this way for some time, fans were worried as reports suggested that he wanted to move to rivals Chelsea.

Along with these rumours there was more drama coming from Manchester's way with the news that Sir Alex Ferguson was retiring and would no longer manage the club. Fans and staff were shocked and upset following the news that the manager was leaving after 26 years in charge.

Stories were circling with David Moyes's name often popping up and on the 9th May 2013 he was revealed as the new manager. On the 5th July 2013 Moyes announced Rooney was NOT for sale and kept repeating this to the media in various press conferences. Despite Moyes's attempts Chelsea admitted to offering £20 million for the strikers signature on the 17th July.

Ever since he has played under Moyes he has shown some outstanding form for both country and club and has retained his place in the starting 11. The crowd are loving him at the minute, particularly at home games when he wears the number 10 Manchester United home soccer jersey 2013 - 2014.

Wayne seemed to be happy again and has since stated that David Moyes has given him a 'new lease of life'. However Sir Alex Ferguson shocked the world with an autobiography book released on 22nd October 2013 where he made some big insults against his former players and other Premier League managers.

One of these included SAF once again repeating that Rooney made a verbal request to him in person, he also said that he thinks Rooney is angry that he did not make a written request because you can risk losing your signing-on fees.

However Rooney has hit back in his own interview and claimed that he does not care about what his former manager has to say and that he just wants to carry on playing good football and focusing on the league, he certainly seems to be honouring that Manchester United soccer jersey a bit better this season.

Hopefully he can carry on showing us his fantastic skill under new boss David Moyes and will stay at Old Trafford for many years to come.

Do you think that David Moyes was the right choice for MUFC?

Take a look at this online soccer store, Soccer Box. They are a shop selling official merchandise including the Manchester United home soccer jersey 2013 - 2014. There are a range of football shirts, soccer kits, training kit, football accessories and much more.