Marcus Rashford and His Journey to the Premier League 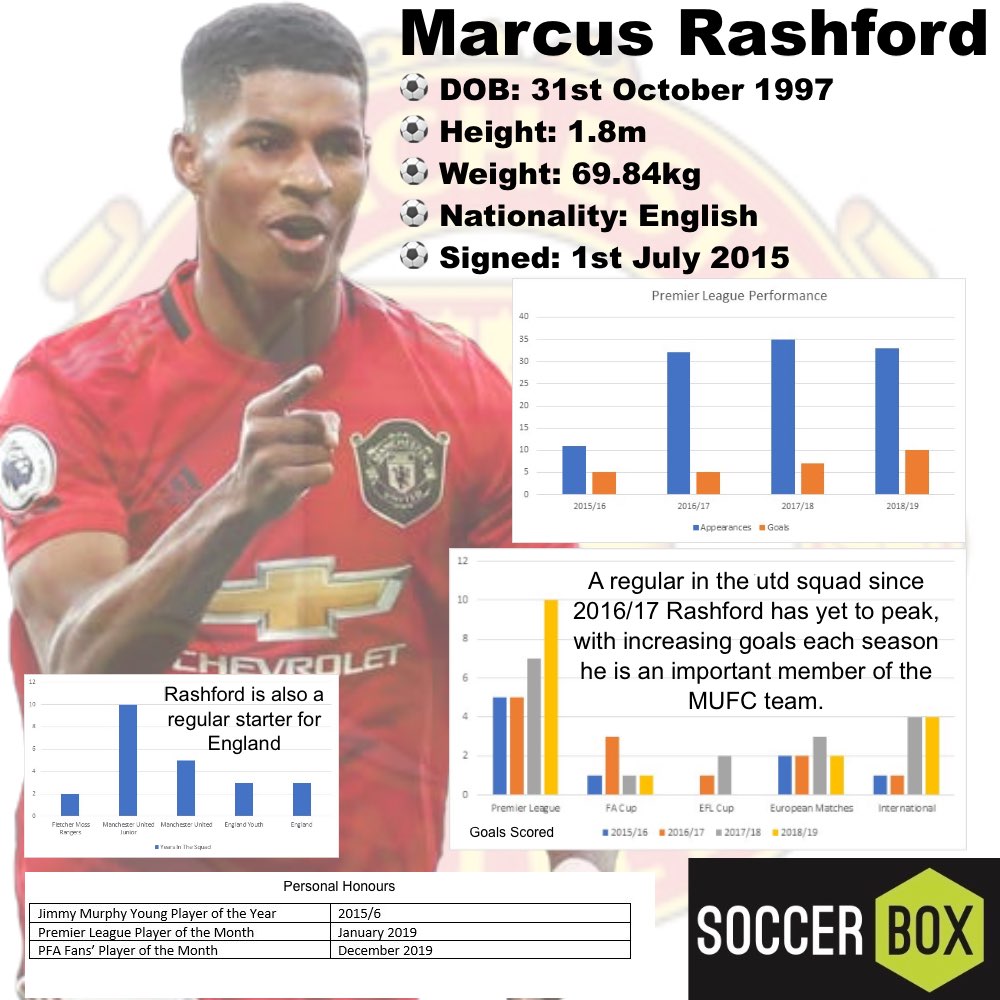 Marcus Rashford is currently the top scorer for Manchester United and he holds a top 5 position for goals in the Premier League and Carabao Cup for the 2019/20 season. In his fifth season playing professional topflight soccer with Manchester United, we are going to look back on his journey from youth soccer to the first team as well as comparing his performance over the years.

Here are the basics of Rashford’s personal and player profile, keep reading to find out more about his journey through the years:

Born on the 31st October 1997, Marcus grew up in Manchester which meant that his connections with the local club were strong from an early age. In fact, the first soccer game he ever saw was hosted at Old Trafford. He was only five years old and playing for a small league youth team called Fletcher Moss Rangers when he attended his first soccer game. At this match he watched his idol, Ronaldo Luís Nazário de Lima, score a hat-trick for Real Madrid and watched in awe at the reaction from the crowd. He has always been inspired by the Brazilian player - Ronaldo but seeing firsthand how he played and how much respect and support the spectators gave him, really motivated him to pursue a career in football. Because only two years after this, he joined the Manchester United Academy at aged seven.

There was also an article posted on the Manchester Evening News where Marcus gave credit to the Manchester United Academy youth coaches while explaining that they gave him a solid ground on which he is now able to build on with the club’s first team.

At 18 years old after he completed his time at the Manchester United Academy, he made his first appearance with the first team as he was named on the first-team bench by Louis van Gaal during a Premier League match. Despite this introduction, he made his first debut with the team during the UEFA Europa League in 2016 after Martial was injured in the warm-up prior to the second half of the game. During his 45 minutes on the pitch for the first time, he netted two goals which added to the team’s 5-1 win to Midtjylland. These goals he scored earnt him the title of Manchester United’s youngest ever scorer in a European competition, beating the record previously set by George Best.

He had an impressive season during 2015/16, so much so that on the 30th May 2016 he signed a new contract with Manchester United which saw him playing with the team until 2020. This contract also included an option to extend it further in the future. On the 1st July 2019 this contract was extended for a further four years which would take him up to June 2023 with another option to extend again.

At the beginning of 2016/17 Rashford was awarded the number 19 by Jose Mourinho and subsequently was given the number 10 only two seasons later in 2018 which was previously used by Zlatan Ibrahimovic.

During his time with the Manchester United first team, the squad has achieved the following titles:

Along with the club achievements he has also acquired the following individual awards for his performance on the pitch:

Here is the breakdown of his performance as a youth playing for the England national team:

Due to his first performance with Manchester United as a senior, he was called up to represent England at the UEFA Euro 2016. Despite speculation of the call from Academy coach – Nicky Butt, Rashford became part of the Euro 2016 squad after being named by Roy Hodson as part of the 26-man squad for the games. His first debut with the England team only came less than four months after that of Manchester United and during his first warm-up match, he scored the opening goal against Australia which helped to contribute to England’s 2-1 win. This therefore made him the youngest Englishman to score on his international debut which broke Tommy Lawton’s record.

During the 2016 tournament he broke another record by being the youngest player to represent England at the European Championships as he was called up to replace Lallana in the 73rd minute of their match against Wales.

His first senior goal for England came in 2017 when he scored the winning goal for England against Slovakia in the World Cup Qualifiers and this performance is what earnt him a place in the 23-man squad for the 2018 FIFA World Cup.

While Marcus was part of the England first national team, here is what awards the team received:

As we have had a look into his journey to the first team for Manchester United and England, we are now going to explore his performance overall across the seasons he has played professionally. Below we have broken down each league/tournament and season in which he has played with the first team and how many appearances and goals he has acquired up until the end of January 2020:

In this breakdown we can see that in recent years he has been gaining more appearance opportunities and making the most of these plays by scoring a larger number of goals for the teams. His strongest season so far is the 2019/20 Premier League season which has seen him net his most goals which is 14 out of his 22 appearances. The Premier League season for 2019/20 is over halfway completed which means we expect this figure to rise.

Do You Think Rashford is an Effective Player?

Within this post we have explored the history of Rashford’s soccer career and how he has performed over the years. Now we would want to know your thoughts on him as a player, do you think he is an asset to Manchester United? Let us know over on our social media pages today! And don’t forget that you can support your favourite Red Devils player by ordering a Manchester United shirt from our online store – Soccer Box.