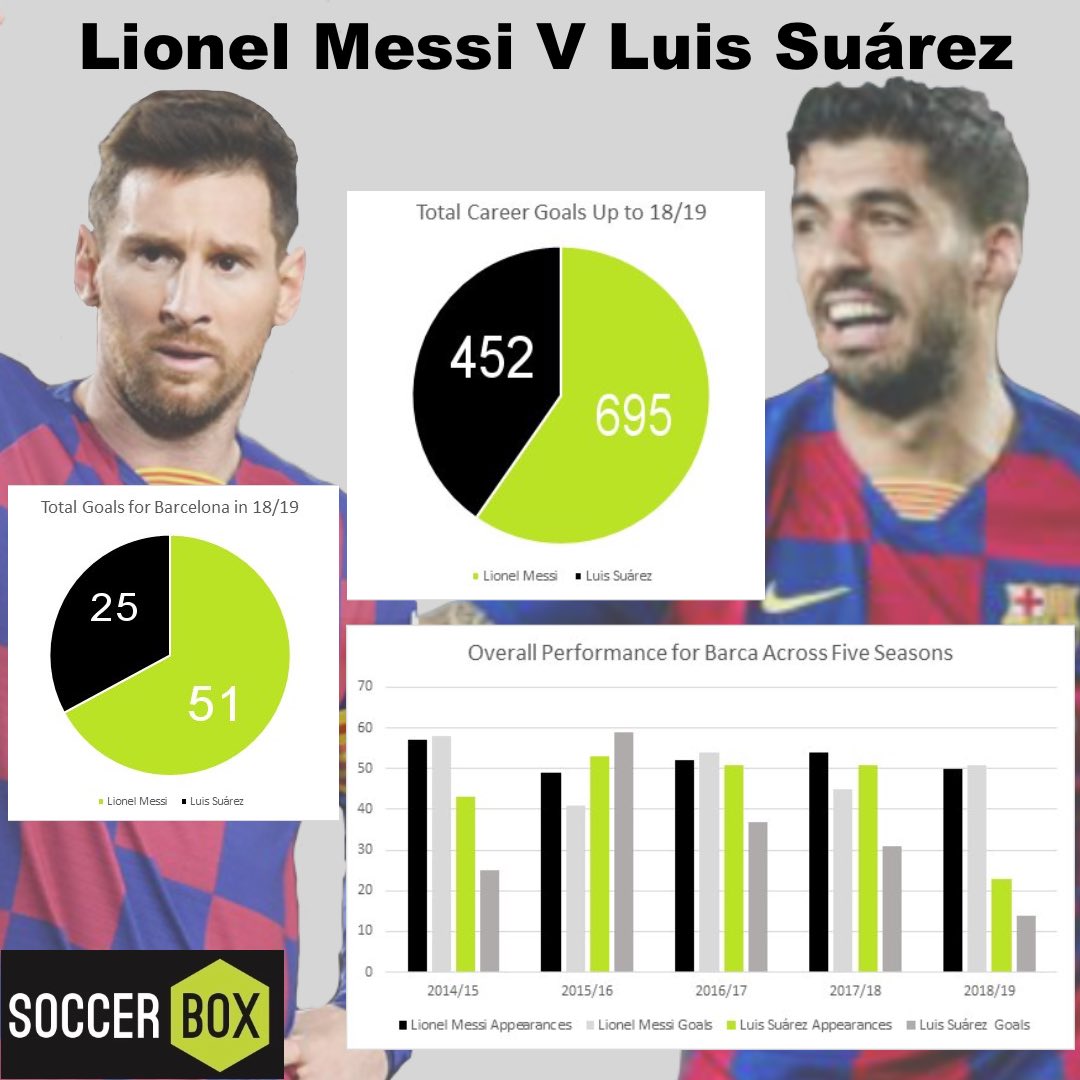 As Barcelona’s top scorers, Messi and Suárez are often compared to one another. Throughout this blog post we are going to delve into the performance of both players from the previous season representing Barcelona as well as their nations to see how they work together compared to on their own or on the opposing sides of the pitch. So, if you want to find out more about these key players in La Liga, then keep on reading.

First off, we are going to explore the performance on the pitch by Messi during the 2018/19 La Liga season representing Barcelona. Below we have broken down each goal he scored per match and what team it was against to try and establish where his strengths are:

As we can see in the list of matches above, Messi scored an impressive amount of goals during the 2018/19 La Liga season. In total he netted 36 goals in the La Liga for Barcelona during that tournament. He managed to make three hat-tricks against Levante, Sevilla and Real Betis as well as scoring two goals in matches against Eibar, Espanyol, Huesca and Alaves. Messi also successfully hit three penalty goals too out of the 36 nets he achieved in the 18/19 La Liga. His total of goals for the season earnt him the top goal scorer title in the season leaving Luis Suárez behind him tied in second place.

Above we have investigated Messi’s performance during the 18/19 La Liga season, but now we are going to see how teammate Suárez fared. Completing his fourth season with Barcelona, below is a breakdown of the total amount of goals he netted for Barca during the La Liga tournament:

Scoring a total of 21 goals in the entire season, Suárez landed himself in tied second place in the La Liga stats table for top scorer. Suárez was consistent with achieving a single goal per match and on 3 occasions he netted two goals against Real Madrid, Rayo Vallecano and Eibar. He also accurately scored five penalties during the season against Huesca, Sevilla, Real Madrid and Alaves.

Although Messi and Suárez share the pitch when playing for Barcelona, they actually belong to two different South American national teams. As a result of this, there are the occasions where we see them standing on opposite sides of the pitch. Therefore, within this part of the blog post we are going to see how they perform for their national team compared to their club.

Here is a breakdown of their two latest tournaments representing their nations. As they both belong to South American national sides, we will see them play in the World Cup tournaments as well as the Copa America.

As we can see in the breakdown above, Suárez appears to be more consistent with his goal scoring netting a total of 4 goals across the two tournaments, compared to the 2 in total for Messi. Despite this, Messi has achieved more assists than Suárez.

Now we have looked into their performance on the pitch during the latest national competitions, below we are going to see how they fared when Argentina and Uruguay went head to head over the years:

Considering in the past two tournaments Suárez has been more successful in terms of goals, looking at their history being on the opposite end of the pitch together, it is apparent that Messi is the strongest.

Throughout the article we have explored the performance of Messi and Suárez individually, but now we are going to see how they compare to one another. Below we have broken down the statistics from the past seasons in which Messi and Suárez have collectively played for Barcelona.

During last season we can see that they spent the same amount of time on the pitch, with the exception of 1 match. But despite them having an almost equal amount of appearances, Messi scored an impressive 51 goals for Barcelona which is over double the number achieved by Suárez. But combined they netted 76 goals for Barcelona which helped them earn the La Liga trophy for a second consecutive season.

In this season only three appearances separated Luis and Lionel, but despite this small difference, Messi managed to net 14 more goals than Suárez who achieved 31. During this season we saw Messi thrive in a Second Striker position in which he scored 29 goals and Suárez played 49 out of 51 matches in a Centre Forward position where he netted all of his goals for that season. Combined they scored 76 goals for Barcelona which helped them reach the top of the league and lift the trophy.

As we can see above, Messi made only 1 more appearance on the pitch than Suárez. Messi played in a Right-Wing position for the majority of the season with a short time as an Attacking Midfielder compared to Suárez who spent the entire season in a Centre Forward position. With only one appearance separating them, Messi managed to score 17 more goals than Suárez. Together they scored a total of 91 goals for Barcelona, however despite this effort the club only reached second place at the end of the season.

Possibly one of the strongest seasons for Suárez, 2015/16 saw him appear 4 more times than Messi, and he did not take that advantage lightly. He managed to net 59 goals for Barcelona which was higher than the number acquired by Messi. Suárez was thriving in his Centre Forward position this season whereas Messi was split between Right Wing and Centre Forward with one match as an Attacking Midfielder. With a combined effort of 100 goals, Barcelona lifted the La Liga trophy at the end of the season.

And finally, 2014/15 was their first season playing together after Barcelona purchased Suárez from Liverpool. During this season Messi scored 41 of his goals in his Right-Wing position and also netted 16 as a Centre Forward and 1 as Attacking Midfielder. This season saw Suárez play mainly as a Centre Forward where he scored 24 goals with his 25th being in a Right-Wing position which was usually held by Messi. Together they totaled 83 goals which helped contribute to the club topping the La Liga table at the end of the season. Considering this was Suárez’s first season with the squad, this was a massive achievement.

Are Messi and Suárez and Effective Duo for Barca?

Through this post we have analyzed the performance of both Messi and Suárez to try and identify who is the more stand out player. As both of these players are effective on the field, they have proven to be a force to be reckoned with when on the same side compared to when they are on opposing teams. Let us know what you think about these two players and don’t forget to pick up the matching Barcelona shirt to your idols today from our online store Soccer Box!