Whether you are trying to get a son or daughter interested in football for the first time or want to surprise your young and budding soccer fan with a great gift, now is the perfect time to purchase new football kits for kids. After all, with the Premier League, La Liga, and virtually every other football league in the world commencing 2014 2015 season play, the soccer world 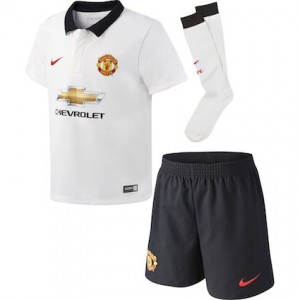 rarely sees this much excitement and attention.

If you're a soccer fan yourself, then you probably already know which team you want to raise your child to be a fan of, but if you need a little help deciding, why not turn to Soccer Box? We've got a vast selection of kids' football kits, so that regardless of which country you live in and which club you support, there's a good chance that we have a youth kit for you. Better yet, the kids jerseys we carry are just as well-made and authentic as adult kits. Just take a look at the Manchester United kids away kit 2014 2015 that is one of our top kids sellers right now!

The Manchester United kids kit is one option that your kids might love. Made by Man United's kit manufacturers, Nike, the uniform includes shirt, socks, and black shorts. The jersey itself is modeled after Man United's away shirt. It's white with a black collar and features the Nike swoosh, the Man United crest, and the logo of Chevrolet United's prime sponsor for this year.

Without a doubt, the Manchester United is one of the favorite football kits for kids that we have on sale at Soccer Box. However, the question of whether or not Manchester United will experience a strong season this year is considerably less certain.

On one hand, Manchester United performed admirably in the pre-season. The club brought coach Louis van Gaal known for coaching the strong Netherlands national team that created numerous upsets at this summer's World Cup to fill the vacant manager's position. And for a while, at least, it looked like Van Gaal was going to be the perfect fit for Manchester United.

Indeed, resounding pre-season wins against world-class teams like Real Madrid and Liverpool had Man United merchandise like the Manchester United kids away kit 2014 2015 flying off store shelves. Fans, both young and old, were certain that their team was ready to make a return to form after last season's devastating seventh-place Premier League finish.

But luck turned against Man United during the first match of this year's Premier League season. In a dispiriting home fixture, Van Gaal's new and improved Manchester United squad fell in a 2-1 loss against Swansea City. Considering the fact that Swansea City finished in 12th place on last year's Premier League table five slots back from Manchester United at its lowest the season opener was a tremendous disappointment for fans of this once-great team.

However, there is still hope that the Manchester United kids away kit 2014 2015 and this year's other Man United kits could end up being the uniforms of a winning team. There are several reasons why Manchester United's new squad might have faltered a bit coming out of the gate.

The first of these reasons is injury. While Manchester United did have some of its best players on the field in the match against Swansea particularly new captain Wayne Rooney, who scored Man United's lone goal of the game many others were out injured. Robin van Persie, Jonny Evans, and Antonio Valencia were just a few of the players out with injuries, so the version of Manchester United showcased in the opening Premier League match wasn't the full squad.

The second reason that Man United might have performed below expectations is that the team simply doesn't have enough star players. Louis Van Gaal seems to prescribe to this diagnosis and has hinted at plans to go after a few new players before the league transfer window closes.

Do you think Manchester United can pull together and have a winning season? Or do you think the luck this year is going to be with different teams? Regardless of which team you want your family to support, Soccer Box has numerous football kits for kids to choose from!