In Slovenia, NK Maribor hold an enviable status among the country's football clubs. Along with Celje and Gorica, Maribor are one of the only three teams in the country that have never been relegated from the top-flight soccer division. The top-flight league, the Slovenian First Football League (abbreviated to 1. SNL in the country's native tongue) has been in operation since 1991. Find out about this club's successful history and keep reading this NK Maribor team profile.

A Tradition of Dominance

Maribor have not just tallied 24 seasons in the 1. SNL but are also the league's most successful soccer club. Indeed, Maribor (commonly nicknamed "the Purples" or "the Violets") have taken first place in the Slovenian First Football League 13 times. They've come in second place on four additional occasions and have finished third three times. The final tally? Of the 24 Slovenian First Football League seasons that the Violets have competed in, they've finished first, second, or third in 20 of them.

Even the other two soccer clubs that have never faced relegation from 1. SNL can't compete with Maribor in terms of sheer consistency. Gorica have won the Slovenian First Football League title four times, most recently in 2013 2014. Celje, meanwhile, have still never won the league but have been the runners-up twice.

Interestingly, none of these three dominant soccer clubs are currently leading the way in 1. SNL. On the 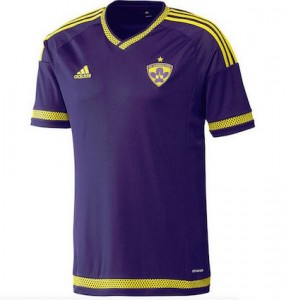 contrary, with 11 of the season's 36 matches played, Gorica are in second place, Maribor are in fifth, and Celje are back at 10th (and last) place. The current leaders, meanwhile-Olimpija Ljubljana-are gunning for their first-ever Slovenian First Football League.

Of course, Maribor certainly have plenty of time to turn things around and catch Olimpija, and based on recent history, the odds are that they will do just that. Indeed, the Violets have won six of the past seven Slovenian First Football League titles. The one year in recent memory where Maribor didn't win the title-the 2009 2010 season-still saw the soccer club finishing in second place.

In 2014 2015, the Violets beat Celje by nine points to clinch their fifth national championship in a row-and their 13th overall. This season, Maribor are looking to take their winning streak to six. And while they may have had a slow start, it's still doubtful that they will be anywhere outside of the top two come May 2016.

Then again, the waters tend to shift in the Slovenian First Football League more than they do in most other countries' top soccer leagues. Case-in-point: Gorica finished in second-to-last place in the 2014 2015 1. SNL season, winning only 10 of their 36 matches. They successfully defended their top-flight position in the relegation playoffs but very nearly exited the 1. SNL for the first time ever.

This season, things could hardly be more different. Maribor are struggling to get in the groove, Gorica have already won seven matches, and Celje are the ones languishing at the bottom of the table. Celje won 20 of their matches last season but have only managed a single victory this year. Could the number of never-regulated Slovenian soccer squads drop to two at the end of the 2015 2016 campaign?

With Celje and Gorica both having close shaves with relegation as of late-and considering that neither team has won the 1. SNL since 2006-it's fairly clear that Maribor are the best club in Slovenian football.

In addition to their 13 Slovenian First Football League titles, the Violets have also won eight Slovenian Cups, four Slovenian Supercups. Maribor also reached the qualifying rounds for the UEFA Champions League, though they have never won a European soccer title. In 2014 2015, the Violets reached the UCL group stage but ended up finishing at the bottom of their group. They failed to make it beyond the qualifying rounds for the 2015 2016 Champions League.

At Soccer Box, we are happy to carry merchandise from the Violets for the first time ever! The Maribor jersey 2015 2016 is one of our newest arrivals this year, a gorgeous purple and yellow soccer jersey from Adidas.