We all know what a fantastic skilled team Barcelona are but all squads need a shake up and a move around from time to time. As one of the most popular soccer teams in La Liga with some of the world's best players, it is important that all players get rested at some point and rotated. Last year the Spanish team won La Liga and their jerseys were the most sought after, young children seem to idolise Barcelona and millions of the Barcelona Boys Home Soccer Kit were sold. You can order these from Soccer Box; this is an online sports store.

The Spanish side still remain unbeaten this season after winning 8 out of 9 games and drawing one when they played Osasuna. 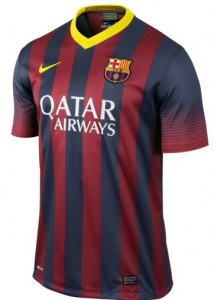 This result was quite a shock to the club and fans after Barca's fine run of results including a 7-0 win against Levante.

With so many good soccer players in the squad to choose from, the manager must switch the players around to give everybody a chance to play in the Barcelona soccer jersey.

Barcelona manager, Gerardo Martino showed that he was not afraid of switching things around when he brought off Lionel Messi and Neymar in a win over Real Sociedad on 24th September. They are very much used to playing a full match in the Barcelona soccer jersey.

There were rumours that the two Barca stars kicked up a bit of a fuss after being taken off and that it has caused a bit of a rift between Lionel Messi and Gerardo Martino.

Messi is known as Barcelona's best player and one of the best in the world, many young fans have had their Barcelona boys home soccer kit personalised with his name and number.

Martino has admitted himself that he will stick to his guns this season and continue to switch players in order to keep everybody fit and healthy and also to keep the players competing for their Barcelona soccer jersey.

He stated 'Against Rayo he did not score but for me it was his best performance. Leo does not like being changed nor does Neymar, Xavi, Cesc and Iniesta. But I was hired to make decisions that relate to the health of the team and the players over the season, so that they are all fit at the decisive stage of the season.'

Some players have hailed Martino's decision to rotate the squad around including one Spanish star in particular, Xavi. The 33 year old said that the new policy has enabled him to feel 'fresh', after being rested for a game and not having to wear the Barcelona soccer jersey.

Cesc Fabregas, Andres Iniesta and Xavi, Barcelona's best three and most used midfielders have all been rotated during a game which has paid off. Having a rest from the Barcelona kit will be the best in the long run.

I think other teams and managers should take a leaf out of Martino's book and try this, it keeps players feeling fresh and ready to fight for their place, rather than the best players get given it to them on a plate.

I write exclusively for Soccer Box, this shop provides a range of official football merchandise including replica soccer jerseys, kid's football kits, training kit and a selection of the latest football accessories.