Olympiacos may not be as widely regarded as the likes of Real Madrid, Manchester United, Juventus, or other clubs that have dominated their countries' professional football circuit for many years at a time. With that said, the Greek soccer club is certainly one worth admiring. Find out more about their dominant history in this Olympiacos team profile.

Consider this: since the rebranding of the UEFA Champions League in 1992, Olympiacos have qualified 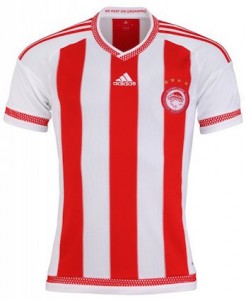 for and appeared in the prestigious European tournament on 17 occasions. Only six football clubs have higher tallies (Real Madrid, Barcelona, and FC Porto with 20; Bayern Munich and Man United with 19; and Arsenal with 18), while AC Milan have also made 17 trips to the UCL. All other clubs, from recent English champs Chelsea (14) to dominant Italian heavyweights Juventus (16) have featured in the event less frequently.

Of course, these statistics don't necessarily establish Olympiacos as a soccer team to watch all by themselves. For one thing, the Superleague Greece is less competitive than the top flight leagues in England, Spain, Germany, and France. For another, the Red-Whites have never actually won the Champions League, having come closest with a quarterfinal run in 1998 1999. (They lost to Juventus that year, who in turn lost to eventual champions Manchester United in the semifinals.)

Still, even if the wearers of the Olympiacos football jersey aren't recognized for their long list of European trophies, they certainly have more than enough Greek football titles to make for an impressive profile. Indeed, the Red-Whites have one of the ultimate dynasties in professional soccer, having won the Greek Championship 42 times and the Greek Cup 27 times. They've managed a double between the two titles on 17 occasions, most recently in 2014 2015.

Add four victories in the Greek Super Cup (a soccer competition that is no longer held), and the Red-Whites have won a total of 73 Greek football titles over the years. To put that kind of dominance in perspective, all other Greek soccer clubs have won a combined total of 37 titles in these three competitions.

Olympiacos' national dominance is impressive when compared against top football clubs from other countries as well. Even just looking at national top-flight league championships, the Olympiacos tally of 42 is more than that of Juventus (33), AFC Ajax (33), Real Madrid (32), Bayern Munich (25), and Manchester United (20). Needless to say, fans in the Olympiacos football jersey have had plenty to cheer about for a long, long time.

There's no reason to expect that Olympiacos FC will not continue their dominance, and add more success to their team profile into the forthcoming 2015 2016 season. They're on the hunt for a sixth consecutive Superleague Greece title and a second straight double between the league and the Greek Cup.

The Red-Whites are also headed to the Champions League for an 18th appearance, and will seek to improve upon last year's early group stage exit. In the 2014 2015 UCL, Olympiacos were drawn into Group A, along with Atletico Madrid, Juventus, and Malmo FF. They acquitted themselves strongly, winning all three of their home games (including a tournament-opening 3-2 thriller against Atletico), but lost their away matches and ended up in third place in the group.

The Red-Whites will have some adjusting to do when they return to don the Olympiacos home jersey 2015 2016 this fall. The club's top scorer from last season, Kostantinos Mitroglou, won't be returning for the new season. Mitroglou, a 27-year-old striker who recorded 16 Superleague goals for Olympiacos in 2014 2015, was on loan to the Greeks from English club, Fulham. Mitroglou had previously been with the Red-Whites from 2007 to 2014, and was loaned right back to the team after his transfer to England.

Still, even without their top scorer (and the league's second most prolific scorer, after Jeronimo Barrales of Asteras Tripolis), Olympiacos have a deep enough squad to still succeed in 2015 2016. Alejandro Dominguez, who netted 15 goals last season, will be back this year, and the Red-Whites are adding a number of forwards to the first team, including Mexican striker Alan Pulido and former Asteras Magoula and Atromitos standout, Tasos Karamanos.

Will the Red-Whites be able to continue their outstanding dominance of Greek football? Root for the team today, with a new Olympiacos jersey 2015 2016 from Soccer Box.