Overall, 2014 has been a momentous year for Olympique Marseille. A rough finish in 2013 2014 left the football club in sixth place, out of qualification range for the Champions League or Europa League, 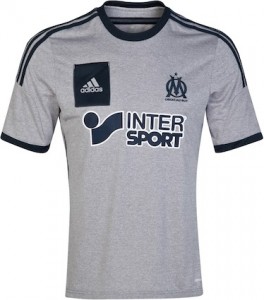 and away from the prestige of the top slots. Evidently, not qualifying for those European cup events has given the wearers of the Olympique Marseille football jersey unparalleled focus in the French Ligue 1. As 2014 turns into 2015, the soccer club is holding on top of the division.

Indeed, Marseille has spent much of the 2014 2015 season so far on top of the Ligue 1 standings table. Challengers have emerged for the throne, of course, including current reigning champions Paris Saint Germain and current second place players, Lyon. Still, the Olympians have shown notable consistency this year, and have clung to the top of the table as a result. Celebrate their surprising success with an Olympique Marseille away shirt 2014 2015, available now at Soccer Box!

The Season so Far

Ligue 1 is currently taking a bit of a hiatus for the holidays, which means that Olympique won't play another match until January 9th, an away fixture against Montpellier.

While players wait to don the away version of the Olympique Marseille football jersey to play that early January match, they can rest easy knowing that they ended 2014 on a high note. The team's last game of the year was a 2-1 at home victory over Lille.

The win over Lille at home continued the Olympique streak of home victories that has stretched now since August. Indeed, the squad has only lost one game at their own Stade Velodrome an August 17th fixture against Montpellier. That was only the second week of the season, though, and perhaps the Olympians hadn't yet hit their groove.

They've had less luck in the Olympique Marseille away shirt 2014 2015. Of the four losses that Marseille has collected this fall, three of them have come while players were wearing the grey and black away jersey.

To Marseille's credit, two of those losses came against the best teams in the league PSG and Lyon. And Monaco, the other team that beat them, is currently slotted in fifth place on the 2014 2015 standings table.

In other words, these losses give no reason to think that the Olympians are weak in any way. One of their defeats this season came before they'd really had time to shake off the summer rust, and the other three came against the best teams of the league when those teams had the home field advantage. Perhaps Marseille will do better against the likes of PSG and Lyon once they are wearing the home version of the Olympique Marseille football jersey.

Need any more reason to believe that Olympique has what it takes to go all the way in the 2014 2015 Ligue 1? Look no further than the other parts of their record. In addition to those four losses, Marseille has amassed 13 wins-more than any other club in the division.

Furthermore, many of those triumphs came in one extended winning streak. Starting on August 23rd (with an away win over Guingamp) and running until the loss against Lyon on October 26th, Marseille won eight fixtures in a row.

Throughout those two months, it didn't matter if players were wearing the Olympique Marseille away shirt 2014 2015 or the white and blue home jersey: they were unstoppable. From a 4-0 home victory against Nice to a thrilling 5-0 away win over Reims, those eight games thoroughly established the Olympians as the frontrunners to take the 2014 2015 Ligue 1 soccer title.

Will they be able to follow through on that lofty goal? And will the second half of the season allow them opportunities to beat clubs like Paris Saint German and Monaco? Root for them today, and get ready for the 2015 football action, with a new Olympique Marseille football jersey, available at Soccer Box! Whether you are looking for a home shirt or an away shirt, you can find it here!