During the group stages of the 2014 2015 UEFA Champions League, FC Porto was one of the few football clubs to make it through all six games without a loss. That undefeated streak lasted through the 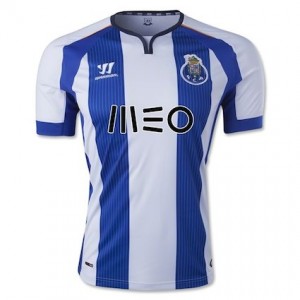 first leg of the round of 16, albeit narrowly. In an away game against Switzerland's Basel, the Dragons escaped with a 1-1 draw. Now, they'll have another chance to beat Football Club Basel on March 10th, this time at their own home ground. You can root for the squad today, with a brand new Porto jersey from Soccer Box!

Soccer Box still has stock available of FC Porto's 2014 2015 jersey designs, manufactured by Warrior. From the sleek white and blue striped Porto home shirt 2014 2015, to the unique blue camouflage aesthetic of the away jersey, all the way to the bright pink third jersey or plain white training shirt, you can find your favorite version of the squad's football shirt here!

You'll want to have a home Porto jersey ready for next month, when the Dragons take on Basel in the home leg of the round of 16. The game will have the highest of stakes, as whichever team wins will progress to the quarterfinals of the 2014 2015 Champions League.

The Dragons haven't won a title at the UCL since the 2003 2004 season, when they beat out Monaco to claim the trophy. Basel, meanwhile, has never won the prestigious tournament, and hasn't even made it beyond the quarterfinals. Needless to say, both sides will be fighting hard for a chance to continue.

Based on group stage performance, the wearers of the Porto home shirt 2014 2015 are the favorites to progress to the quarters. Playing in Group G, the Portuguese club won four games and drew two to take the top slot. The draws both came against Ukraine's Shakhtar Donetsk, whose Luiz Adriano is currently the top goal scorer in the tournament. Porto's record also included home and away victories against the other soccer teams in G: Germany's Athletic Bilbao, and BATE Borisov from Belarus.

FC Basel, meanwhile, had the weakest groups record of all of the teams that made it through the round of 16. The Swiss football club was in Group B, with Real Madrid, Liverpool, and Ludogorets Razgrad. They lost three of their six games, falling twice to Madrid and once to Razgrad. Their record was rounded out with at-home wins against Liverpool and Razgrad, as well as an away game draw with Liverpool.

Still, the Swiss squad put up a good fight when facing off against the Dragons in the first leg of the round of 16.

Indeed, for a fair run of the match, it looked as if they were going to use their home field advantage to score a surprise win. They took the lead early on, with an 11-minute goal from Derlis Gonzalez, and then proceeded to hold it for over an hour of playtime. Once the 70-minute mark had come and gone, fans in the Porto jersey were justifiably getting worried.

Luckily, the Dragons put in a clutch performance during the final 15 minutes of the fixture. At the 79-minute mark, defender Danilo de Silva scored a penalty goal to equalize the score. The soccer match closed with a 1-1 draw.

Now, FC Porto will have a chance to fight for 2014 2015 UCL advancement with a March 10th home fixture. With fans in the Porto home shirt 2014 2015 packing the stands at the team's Estadio do Dragao, the Dragons will have all the momentum they need to put an end to Basel's tournament run. Plus, considering the fact that Porto controlled possession of the ball for 72% of the first game, there is little question that they are the more skilled team.

Help cheer Porto toward a title at the UEFA Champions League! Soccer Box is the perfect place to pick up an official 2014 2015 Porto jersey, whether you are looking for a standard home or away shirt, for a pink third shirt, or for a plain white training shirt!