Portugal Disappoints Again and is Out of the 2014 FIFA World Cup!

Whether or not we would even see the launch of a Portugal World Cup home kit was questionable from the tournament's qualifying stages. Portugal was drawn into qualifying group F, a seemingly straightforward group upon initial inspection 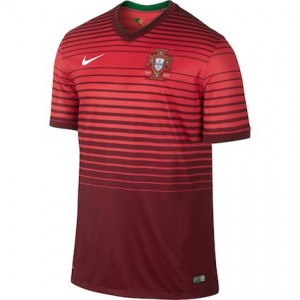 alongside Russia, Israel, Azerbaijan, Northern Ireland and Luxembourg. However, it wasn't as easy as it seemed.

Of the 10 qualifying games Portugal secured a record of 6 wins, 3 draws and 1 loss, not entirely unsatisfactory, but ultimately not enough. Russia piped Portugal to the top spot with a record of 7 wins, 1 draw and 2 loses, meaning Portugal would need the 2nd round playoff to secure qualification to the World Cup finals in Brazil.

Portugal was drawn against Sweden in the playoff round. Portugal, and Real Madrid star forward Cristiano Ronaldo pulled out all the stops and almost single handedly secured his teams place. He scored 4 goals over the 2-legs resulting in a 4-2 aggregate score and the official launch of the Portugal 2014 World Cup home jersey.

Despite the somewhat somber performance of the Portuguese team the Portugal 2014 World Cup home jersey still makes a fantastic purchase for fans of the national team and star striker Cristiano Ronaldo. At Soccer Box you can even shop for the shirt with official Ronaldo 7 lettering if you choose. Portugal may be out but they will be back later in the year for the Euro 2016 qualifiers, and you can bet they will be stronger, more organized and determined to win.

Unfortunately, for Portugal after the disappointment of qualifying, the group stage draw wasn't favorable either. Portugal was drawn into Group G, what was later deemed the Group of Death. They would face Germany, the USA and Ghana. No team was clear favorite, and the there was no guarantee that the Portugal World Cup home kit would make it past the 1st stage.

Prior to kickoff, many pundits would have been betting on the two European sides finishing in the top two spots and advancing to the knockout stages. However, opinion changed dramatically after the first round of games that saw Portugal face Germany.

Germany certainly proved they were worth their 2nd place FIFA Ranking, and their position as favorite European team to take the trophy. Portugal didn't get a look in Muller netted a penalty after only 12 minutes, and Hummels added a 2nd at 32 minutes. At 37 minutes disaster struck and Pepe, wearing the number 3 Portugal World Cup home kit, was sent off leaving the team trailing 2-0 with only 10 men. Just before halftime Muller added a 2nd, completing his hat trick in the 2nd half to end the game 4-0.

Portugal played better in the 2nd game against USA scoring an early goal to take the lead. The USA proved they weren't an easy win though, Jones and Dempsey added a goal each leaving Portugal trailing. In the 95th minute when the USA was all but celebrating their win Varela hit the net securing a 2-2 draw and the 1st point for Portugal.

Last night, the Portugal national football team took to the pitch for the final group stage game against Ghana. Portugal needed the USA to lose against Germany, and they needed to beat Ghana by a good margin to overcome their -4 goal difference from the 1st game. The USA obliged, but with a win of only 2-1, and another unconvincing performance the Portugal World Cup home kit will take no further part in this tournament.

Cristiano Ronaldo and his teammates will be leaving Brazil over the coming days, disappointment in the hearts but in the full knowledge that they could of done better. In September this year qualifying for the European Championship 2016 begins, and the Portugal national football team will be regrouping and focusing their efforts on a more successful campaign.

Portugal is in Euro 2016 qualifying group I alongside Denmark, Serbia, Armeina and Albania. Again, this should be an easy group in, which Portugal will shine out as the strongest. Yes, the team will wear the same World Cup shirt for Euro 2016 qualifying making it an even better value purchase for devoted fans.

You may be disappointed that Ronaldo and the team is going home but the World Cup still has many exciting twists and turns to come. Order your World Cup football shirts at Soccer Box, and don't forget to pick up the Portugal World Cup home kit and get ready for the Euro 2016 qualifying campaign that begins in September.