Football fans await this time of year so patiently to see what their beloved soccer team will be wearing the next season. Most Premier League teams have now launched at least one of their new football kits for 2018/19, and some are due to be released in the next few months. Let’s take a look at the most impressive and stylish jerseys on sale from a variety of manufacturers at the moment.

Arsenal Home and Away Kits

Produced by Puma for their last season before transferring over to Adidas, they have most definitely pulled out all the stops with their new home jersey. Compared to last year, they have reverted back to a rounded neckline while still keeping the red torso and white sleeves. However, this time the white is seen across the shoulders as well.

Bringing a modernized and unique feel to the shirt, there are thin light red stripes around the ends of the sleeves. With this, there is also a slight chevron styled portion of the torso at the top in the same striped effect. This subtle addition to the style of the classic red and white jersey is refreshing and stylish.

A complete colour scheme change happened for the Arsenal away shirt 2019. Formerly a blue and navy gradient, this time the jersey is navy with red detailing. Across the centre of the chest is a zigzag pattern made up of thin red lines and there are red textured prints at the ends of the sleeves and across the tops of the shoulders. The sponsorship and Puma logos still remain white like that of last seasons. A v-neckline finishes this jersey off which is an updated style to that of the crew neck used previously. 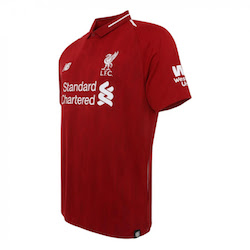 The Liverpool sportswear ranges are once again manufactured by New Balance. Bringing a smart look to the new season’s home shirt, they have dropped the v-neck with white piping that was seen last season for their 125thanniversary and adopted a collared neckline. Fastening with a button in the middle, this collar is the perfect addition to the shirt.

A minimalistic approach to this shirt provides a very stylish and crisp feel to the top. This is achieved by them not only keeping to the signature red and white colour scheme of Liverpool FC, but also leaving the detailing to a minimum. With only a thin white line on the collar and shoulder hem, the base of this shirt is pure red.

Stepping into their second consecutive season producing the Chelsea FC apparel, Nike has certainly not disappointed. Adapting on the team’s classic blue and white colour scheme, this 18/19 home shirt incorporates a pop of red into the mix. Red and white horizontal flecks are seen across the sides of the torso which stand out against the blue base.

Compared to last season, this is definitely one of the most visually pleasing patterns on the market. Previously the shirt was a plain blue with white accents, however this modern update is sure to be a hit with a variety of supporters.

Finishing off the design of the Chelsea home shirt for 18/19, the manufacturer and sponsors logo have been applied in white. Carrying on from the style previously used, this colour complements the bright base nicely. 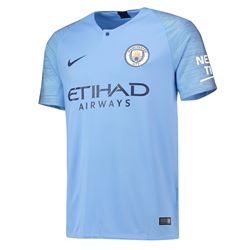 Since 2013, Nike has manufactured the sports clothing for Manchester City. For this season they have kept with their simplistic design of a sky blue base, with navy and white details. However, improving on the shirt seen previously, the neckline has been altered to a rounded neck with a buttoned placket.

The sleeves also feature a textured look which contrasts nicely against the solid polyester torso and back. This is one of the plainest updates we have seen as of yet to the new season’s Premier League gear.

To begin with Manchester United has teased previews of their new styled home and away ranges. Although, their first shirt to hit the rails was their third. Produced by Adidas under part of their sustainable initiative which makes jerseys out of recycled polyester, they have definitely chosen an interesting colour scheme.

Last season’s Manchester United third jersey was a grey shirt with a graphic printed on the front which featured the United Trinity Statues. These statues being of players George Best, Denis Law and Sir Bobby Charlton at the front of Old Trafford Stadium.

However, this time they have stepped away from the homage design and gone for a textured look. With a navy base colour they have opted for golden accents. By choosing this colour for their detailing, it amusingly matches magnificently with their sponsors logo – Chevrolet. Rounding off the new look of the third jersey, the neckline and sleeves are outlined in a plain navy to contrast perfectly against the textured background.

Who Has Impressed the Most so Far?

With numerous other team’s launching their other ranges and such in the coming weeks, we expect to see a fantastic variety of intricately detailed and crisp stylish shirts on offer. Exploring the shirts already available, we have noticed that a trend of a buttoned neckline whether it be a rounded or collared, is most certainly a prominent similarity.

When it comes to design, the most detailed and eye-catching pattern at the moment is that of the Chelsea home with it’s flecked attributes. And the Manchester City and Liverpool home shirts seem to be the most plain at the moment by sticking to a classic colour scheme and a minimalistic design.

After taking a brief look at the Premier League shirts already on sale for 2018/19, who did you think impressed you the most? And who’s jersey are you most looking forward to seeing? Join us over on our social media channels and let us know, we’d love to chat!

If you like the sound of any of these shirts above, be sure to checkout our store Soccer Box and grab yourself a bargain on an authentic Premier League football jersey, just in time for the new season to begin!

This article was written by Loren Astbury for Soccer Box.