Looking for football kits for kids, but don't know which soccer club you want your young boys and girls to root for? Based on current standings, Real Madrid is the natural choice. Not only is the team 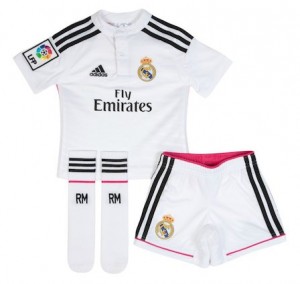 currently leading the way in the 2014 2015 La Liga standings, but they are also gunning for their second consecutive Champions League title. In short, it's the perfect time to pledge your support for the Vikings.

If you are shopping for yourself, take a look at the club's away kit. The 2014 2015 away shirt is nothing short of stunning, with a bright and bold pink design that is unique and distinct from anything else in football. You can get player-specific versions of this shirt (or the home kit) for Real soccer stars like Gareth Bale, Karim Benzema, and of course, Cristiano Ronaldo.

Real Madrid had a good run in the 2013 2014 season, coming in third place in the Spanish La Liga, and bringing their record count of Champions League trophies to 10. The UCL victory seems to have truly instilled the Vikings with the will to win, because the club has been virtually unstoppable this fall.

In addition to a top slot in the current La Liga season, Real has earned the title of "frontrunner" in the 2014 2015 Champions League. And while some would argue that they had that title by default, given their status as the reigning victors, their performance in the group stage only affirmed that fact.

If you are thinking about purchasing Madrid football kits for kids this holiday season, look no further than the club's record in the UCL group stage to sway you. Of the 48 teams that participated in the groups, the Vikings were the only squad to escape with a perfect record: six wins, zero draws, and zero losses.

Real's victories came in home and away matches alike, against Basel, Liverpool, and Ludogorets Razgrad. Each match gave all of the team's fans ample reason to rejoice-whether they were young kids in the Real Madrid boys home kit 2014 2015, or longtime supporters wearing adult kits.

Given their unbeaten streak in the groups, it goes without saying that the Vikings will now be one of the top seeded teams in the knockout phase-and specifically, the round of 16. The draw for the next phase has matched Real Madrid up with German soccer club, Schalke 04.

The two teams will face off in two-leg battle scheduled for February and March. That means you have ample time to pick up a few football kits for kids, if you want to get the young boys and girls in your family excited about the football action!

The Vikings met Schalke 04 in the same round of the UCL a year ago, and it goes without saying that they ultimately won the match-up and advanced to the latter rounds of the tournament. The wins were substantial, both at home (3-1) and away (6-1), so fans of Real Madrid have reason to believe that their squad will have little trouble winning the match-up once more.

The away fixture in the Real Madrid versus Schalke 04 battle will come first, on February 2nd, 2015. Meanwhile, you will want to make sure your kids have the Real Madrid boys home kit 2014 2015 ready for the home game, scheduled for March 10th.

Are the Vikings headed back to the top of the Champions League podium in 2014 2015? If you think so, stop by Soccer Box today and pick up some new club gear! If you are looking for football kits for kids, check out the Real Madrid boys home jersey. If you are shopping for yourself, there are a number of soccer kits for you to choose from.