The 2014 2015 La Liga season is upon us, and with it comes a predictable surge in interest in all sorts of football gear. At 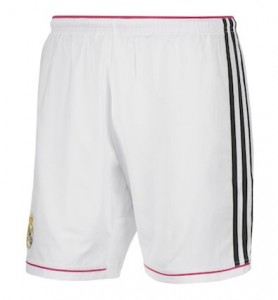 Soccer Box, we have branded gear for all of your favorite Spanish football clubs, from the normally victorious heavyweights to the middle-of-the-pack stalwarts. In other words, we don't just have jerseys, but we also have other clothing items you might love, like Real Madrid shorts and socks!

Not that our Real Madrid store is limited to shorts and socks, however. Soccer Box also has a full selection of team jerseys, like the Read Madrid home kit 2014/15. The shirt, a subtle redesign on Real's traditional white-with-black-trim home shirt, is a good-looking and comfortable Adidas jersey that Real Madrid players will be wearing as the team plays its home fixtures at Santiago Bernabeu Stadium this season.

The Soccer Box Real Madrid store also includes Real's away jersey for this season. If the team's home shirt doesn't feature any major design departures from last year's jersey, then the away kit is the opposite. Where last season's Real Madrid away jersey was a bright blue color, this year's take on the shirt is a vibrant pink! It's a bold new design choice, but one that will undoubtedly look impressive on the field.

Our selection of Real Madrid shorts and socks includes items to match both the home and away kits for this season. We have plain white shorts with black stripes running down the side, but we also have shorts in the same bright pink color as the Real Madrid away jersey. The same variations exist for socks, so if you've always wanted a pair of radiant pink football socks, now is your chance to get them!

While there is little doubt that Adidas did a great job when it came to designing this year's Real Madrid home kit 2014/15 and away jersey 2014/15, even the best jersey designs would be disappointing without a great squad to wear them.

Luckily, it looks like the 2014 2015 season is going to be a strong one for the Real Madrid football club. With most of the team's biggest stars returning including world-class talent like Cristiano Ronaldo, Gareth Bale, Xabi Alonso, Iker Casillas, and Pepe it seems that this season should be at least as strong as last year's was.

As far as new players are concerned, there really aren't many. Unlike many other football clubs throughout Europe, Real Madrid stayed pretty conservative during the summer transfer season this year. In fact, Read Madrid is currently only bringing three new players onboard from outside clubs. The rest of the squad will either be made up of returning veterans or of younger, greener players who have been called up from Real Madrid's B-team.

So who are the new transfers that will be wearing the Real Madrid home kit this season. They include Toni Kroos, Keylor Navas, and James Rodriguez.

Toni Kroos is likely the most proven commodity of Real's new transfers. While playing for Bayern Munich over the past seven years, the 24-year-old midfielder earned the nickname "El Jefe" for his ability to set up goals for other players. Indeed, at this summer's World Cup, Kroos gave a breakout performance, recording four assists overall and scoring two goals in Germany's match against Brazil (two minutes apart, no less) to help his team to a 7-1 victory.

Few were surprised when Kroos was named "man of the match" for that particular performance, or when he ended up on the shortlist for the Golden Ball. In fact, some analysts even named Kroos the best player of the entire World Cup tournament. Needless to say, he will make a strong addition to the Real Madrid squad.

If Kroos is Real's strongest transfer, though, then Rodriguez is certainly a close runner-up. The 23-year-old player who serves as both a winger and an attacking midfielder made a starring turn of his own at the World Cup this summer. Playing for Colombia, Rodriguez scored six goals and made two assists. He did all of this even though his team exited the tournament relatively early, with a quarterfinal loss, and ultimately won the Golden Boot as the top goal scorer of the tournament.

Are you excited to see Real Madrid's new transfers at work this season? Celebrate the new squad and the start of La Liga play with Real Madrid shorts and socks, or any other gear that might catch your eye on the Soccer Box website.