Luis Suarez has become one of the most controversial soccer players known in football today, this is down to his fantastic on field performances and off field antics. The Uruguayan 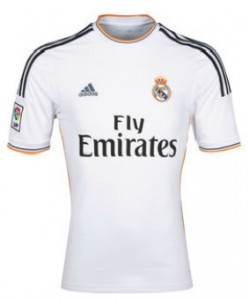 international has repeated several times to the club that he would like to leave for a club chasing the Champions League football, he has reportedly stated that he dreamt of playing in the Real Madrid soccer jerseyÂ but will the dream come true?Â  Liverpool however are very intent on keeping their star striker for a few more seasons to come.

There were many clubs interested in Suarez's signature when the striker claimed that he wanted out of the club, these included Suarez's dream team Spanish giants Real Madrid. Carlo Ancellotti is desperate for the 26 year old to join the team in the Real Madrid soccer jersey.

In August 2013 the Liverpool man told the 'Guardian' and 'Daily Telegraph' that the Reds had 'promised' to let him leave in the summer of 2013 if they did not qualify for Champions League football, but went against their promise after failing to qualify.

He also stated that another reason he wanted to leave English football was down to the intrusion on his private life by the media and rumoured stories.Â  On August 6th 2013 Liverpool received a bid from Premier League rivals Arsenal, but rejected an offer of 40,000,001 which they thought would trigger his release clause.

On the 8th August the club once again stated that Suarez would not be leaving the club and in the end on the 16th August the 26 year old apologised to the fans and decided he would stay at the club, with his reason being the support from the Liverpool fans.

On the 21st April Suarez was involved in an incident which saw him bite Chelsea's Branislav Ivanovic. He got given a 10 match ban by the F.A and made a return to football in the Liverpool home jersey 2013 - 2014 on the 25th September 2013.

So far this season he has done well but a new story has now surfaced, Suarez is still wanting to leave the club and Real Madrid are ready to offer Liverpool £20 million plus Karim Benzema in an attempt to lure him to the Bernabeu, will Suarez be tempted?

With Luis Suarez scoring the goals he is at the moment, can Brendan Rogers and the club afford not to sell him if the right offer comes along? The striker has scored 6 goals in four games, including a hat-trick against West Brom on Saturday. Performing like that in the Real Madrid soccer jersey would see him compared to Madrid's star man Cristiano Ronaldo.

His form is very impressive at the minute and they may decide they have to sell while he is playing so well, with the likes of Real Madrid ready to offload players such as Karim Benzema, Angel Di Maria, Sami Khedira plus cash can they turn that down?

Carlo Ancelotti, the manager of the Spanish giants is particularly keen on offloading Karim Benzema. He has fallen down the pecking order since Gareth Bale's arrival and no longer is first choice in the Real Madrid soccer jersey.

The Reds will try their hardest to keep their Uruguayan genius, they are likely to use the same tactics used in the summer transfer window and hang a 'Not For Sale' sign around his neck, after all it worked and he is still a Liverpool player to date.

Liverpool know that they need to keep him, he is what will decide whether they regain Champions League status again. His partnership with fellow club man Daniel Sturridge is red hot at the minute. They are now known as the SAS partnership, Suarez and Sturridge.

With him in tow you could put a bet on the fact that they would at least gain a top four spot in the PL this season AT LEAST and maybe even a challenge for the title, who knows? All we know is that they must not let him sign up for the Real Madrid home soccer jersey 2013 - 2013 and must keep him at Anfield.

Do you think that Suarez will leave this January?
Could you see him playing in the Real Madrid home soccer jersey 2013 - 2014?