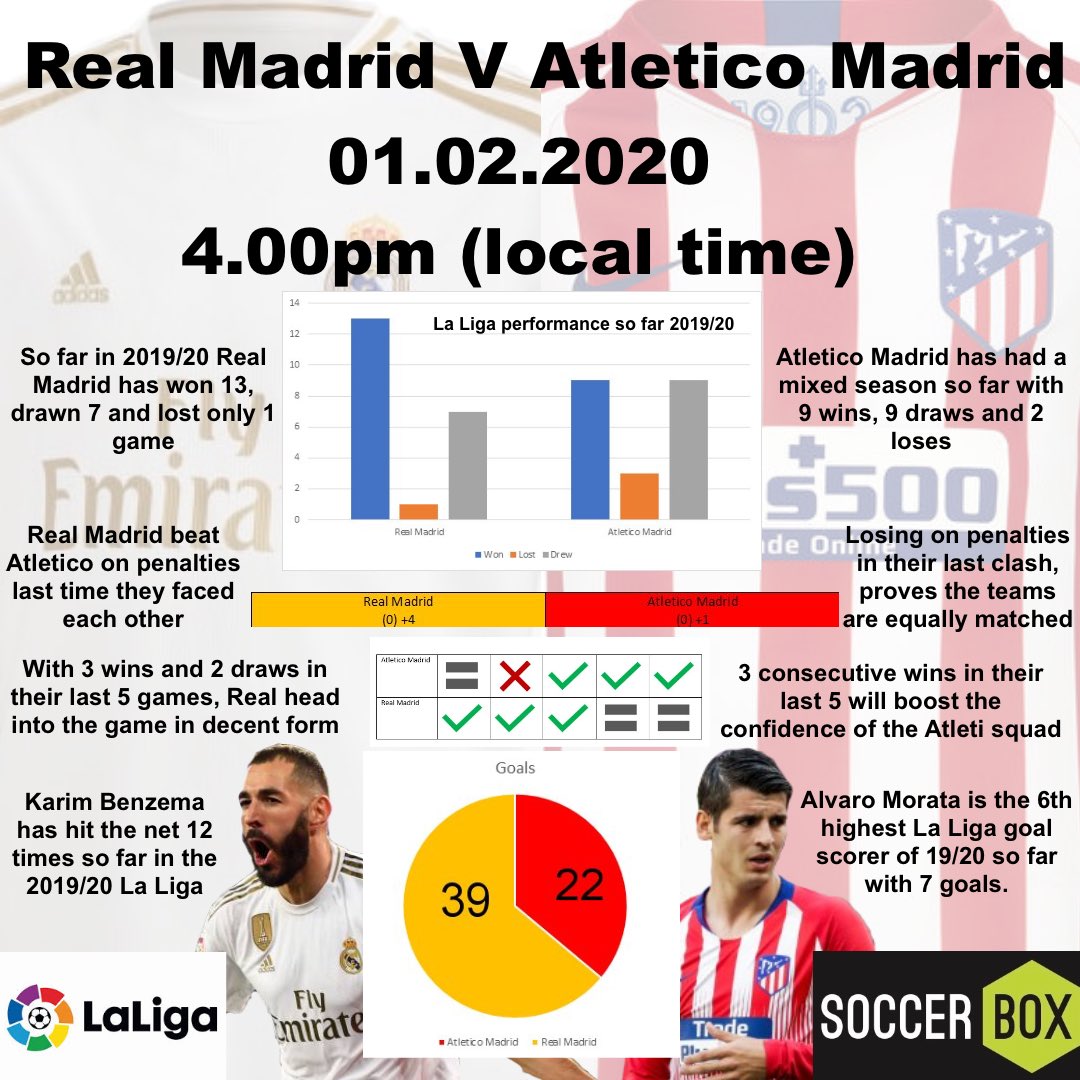 On the 1st February the two teams from Madrid go head to head in the La Liga fixtures for a second time this season. And to prepare for this upcoming game, we are going to look into the performance of both sides and try to gauge an idea how it will turn out. So, if you want to find out more about how this game could go, then keep on reading.

In the breakdown above we can see that Real Madrid has won three out of their past five matches and drew on their latest two against Barcelona and Athletic Bilbao. In total, during the 2019/20 season, Real Madrid has won 13 out of 21 matches with only 7 draws and 1 loss which was to Mallorca who won 1-0. Apart from that single loss, Real Madrid has been considerably strong this season as they hope to climb the ranks of the league to regain a Champions title.

The last Champions title in the La Liga games we saw Real Madrid achieve was in 2016/17 and since then they have been consistently in the top 3 fighting it out with the likes of Atletico Madrid and Barcelona. Here is the breakdown of all of the seasons in which Real Madrid has lifted the La Liga trophy:

In total, Real Madrid has won the La Liga 33 times and these wins were somewhat consecutive across a number of decades starting in the 1930s. There are various gaps in their achievements which saw Atletico Madrid and Barcelona most often than not lift the trophy instead which displays how close of rivals these teams are.

Support your favourite Spanish soccer team on their journey to acquiring their next Champions status by donning the matching Real Madrid home shirt to your idols this season which can be purchase from our online store.

Now we have had a look into how Real Madrid has been performing, in this section of the post we are going to analyze the matches played by Atletico Madrid this season so far. With this we can gauge how the team is coping as a whole in the league and what we could expect on Saturday too. Here are the last five 2019/20 La Liga fixtures for Atletico Madrid along with the result:

In this breakdown we can see that Atletico Madrid has been able to secure three wins out of the past five La Liga matches, losing one match and drawing on the other. Looking at their performance in the entire season so far, they have won a total of 9 matches out of 21 with 9 draws and three losses. As their win/loss rate is the same, this could see their quality of play questioned.

Next, we are going to look at Atletico Madrid’s performance in previous La Liga tournaments and especially those in which they won the Champions status. Here is the breakdown of the La Liga wins which Atletico Madrid has received over the years:

Above we can see that they have had a relatively strong stance in the La Liga tournaments during the 1960s and 1970s but have yet to secure a Champions title since 2013/14. However, since their last trophy win, we have seen them fighting close with Real Madrid for the 1st place spot as they have consistently been in the top 3, with the 2018/19 seeing them in 2nd place.

Get ready for the upcoming match and invest in the Atletico Madrid home shirt which is widely seen across the city and its striking colour way is guaranteed to make you stand out from the crowd. So why not pledge allegiance to your idols this season by wearing the matching shirt to them which you can pick up from our store – Soccer Box.

Above we have been exploring the progress of Atletico Madrid and Real Madrid in the La Liga 2019/20 season on a whole. These results have covered them taking part in matches against other teams in the league, therefore this section of the article is where we compare the past fixtures where the two went head to head. Here we have a breakdown of the last five head to head matches which Atletico and Real have played in the La Liga tournaments:

As we can see, when the two have played against each other in the La Liga, they have always been close. Only one match in the past five they have played together saw Real Madrid ease ahead with a 3-1 win, other than that their last five games saw them constantly drawing. Going by these results, we could expect to see another draw on Saturday.

Now we have looked into their matches together, we are going to compare how similar the teams actually are in terms of results by breaking down their ranks from the last five La Liga tournaments. Here we will be able to see how close things are between the two despite their one on one matches being so different.

As we can see Atletico Madrid and Real Madrid have always been close in terms of overall performance in the La Liga as they have both consistently made top 3 in the past five seasons. The last two seasons saw Atletico Madrid placing higher than Real Madrid who has secured higher placed in three other seasons and a total of 33 Champions titles overall.

At the moment in the 2019/20 La Liga Real Madrid is ranked first, and Atletico Madrid is down in 5th, but this could all change as we are only just halfway through the season. Could Real Madrid redeem themselves from their previous 0-0 tie and take the win or is Atletico Madrid going to keep up with their consistency and beat the opposition? There is only one way for us to find out.

Next, we are going to analyze the key players of both Atletico Madrid and Real Madrid to see how each team is fairing at the moment. Below we have explored the current performance of key players on both sides to see who we need to watch out for during the upcoming game:

Predictions on the Upcoming Match

In this article we have explored the current performance of both Atletico Madrid and Real Madrid in advance of their second match together this La Liga season. But now we want to know your thoughts, who do you think will be victorious? Let us know over on our social media pages now. Don’t forget that you can also purchase the Real Madrid shirts and Atletico Madrid shirts from the team’s pages here at Soccer Box and pledge allegiance to your favourite side during this weekend’s match.