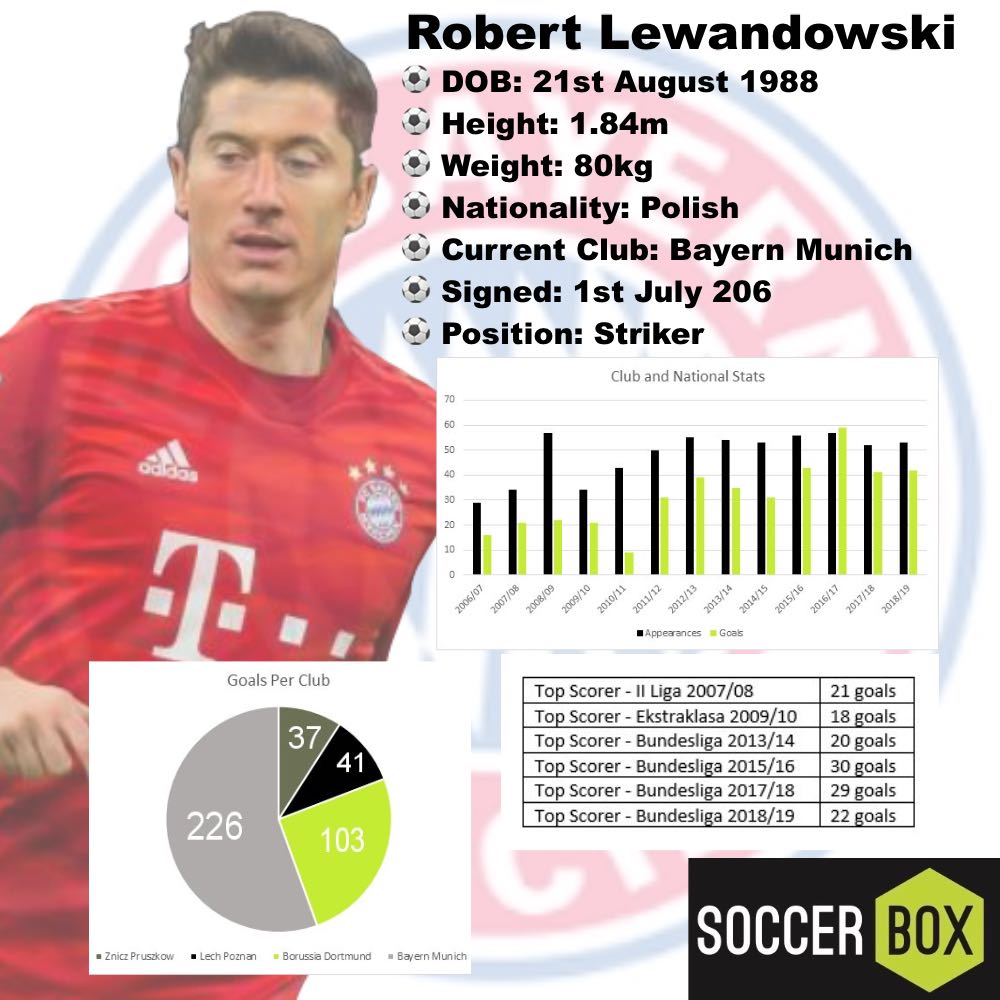 Consistently at the top of the table in the Bundesliga for his impressive goal scoring, in this post we are going to look through the career of Robert Lewandowski. Throughout this article, we will explore his junior and senior football journey both with club and national squads. So, if you want to find out more about this striker then keep on reading. Here is the basics of Robert Lewandowski’s personal and player profile:

Born on the 21st August 1988, Robert started his football career with a local club called Partyzant Leszno as an unregistered player. At nine years old he joined MKS Varsovia Warsaw where he stayed for seven years. Now in his mid-teens, Lewandowski moved again to Delta Warsaw where he thrived. Compared to previous stints with junior clubs, he was unable to be consistent with goals, but during his time with Delta Warsaw he was on the first team and netted four goals in total. And finally, in 2005 he moved to Legia Warsaw II where he only spent one season before making his first senior debut with another club.

Lewandowski started his senior football career with Znicz Pruszkow after leaving Legia Warsaw II in 2006. He appeared for Znicz Pruszkow 32 times across the two seasons he was with them and managed to net a total of 21 goals and make 1 successful assist. Due to his high goal tally during only two senior seasons, he gained interest from other clubs who wanted to purchase him. Then in June 2008 he made his first senior transfer from Znicz Pruszkow to Lech Poznan for a reported 1.5M PLN.

His first debut for Lech Poznan came the month after signing where he was sent on as a substitute during the UEFA Cup qualifier against Khazar Lankaran. In this first match of his with the club he certainly made a statement as he was the only player to score a goal, thus leading the team to a 1-0 victory. He continued to impress during his two seasons with Lech Poznan by scoring a heel flick goal only four minutes after being on the pitch and ended the season on 18 goals which helped the club win the 2009/10 Championship.

After a successful four seasons as a senior, the buzz started around Lewandowski and rumours started about him moving clubs. He joined Borussia Dortmund in June 2010 and signed a four-year contract with the Bundesliga team. The fee for this transfer is reported to be around 4.5M Euros. This was a big move for Lewandowski as it saw him move away from Polish clubs and into a bigger international league.

Lewandowski scored his first goal for Borussia Dortmund only a few months after signing during a match against Schalke 04. During the 2011/12 season, Robert was given a spot in the starting line-up due to an injury acquired by Lucas Barrios. He did not disappoint when on the pitch as he scored twice during a match against SV Sandhausen. He continued to impress during his time covering for Lucas Barrios as he netted a hat-trick against FC Augsburg and hit the net twice during a match against FC Koln. As a result of this season’s performance, he was awarded with the title of Best Player of the Year in Poland. He continued to score impressive goals after the winter break when Barrios was expected to return, one of these occasions was a hat-trick scored against Bayern Munich in the DFB-Pokal Final.

For the 2012/13 season, Robert made his first appearance for Borussia Dortmund against Werder Bremen and made his first goal against Bayer Leverkusen on the 15th December 2012. As well as this, he went on to score the winning goal against Ajax in the Champions League during the 87th minute. During the Champions League Lewandowski was the first player to score four goals in a semi-final after Borussia Dortmund beat Real Madrid 4-1.

Lewandowski started the 2013/14 season off well by scoring a hat-trick against VfB Stuttgart on the 1st November. He also scored twice in the Champions League match against Zenit which made him Dortmund’s overall top scorer in European tournaments. On the 16th April 2014 Lewandowski was presented with a number 100 jersey to celebrate his 100th goal for Borussia Dortmund.

A controversial decision was made by Lewandowski ahead of the 14/15 season as he signed a pre-contractual agreement with Bayern Munich which are Borussia Dortmund’s rivals. He officially started with Bayern Munich on the 3rd January 2014 and was due to be with the team for five years.

During his pre-season debut with Bayern Munich, he scored his first goal on the 21st July 2014 for his new club. His first competitive debut was a match against Borussia Dortmund which was his former club and Bayern lost 2-0. Lewandowski scored his first competitive goal for Bayern during a match against Schalke 04 which ended in a 1-1 draw. He faced Dortmund again in November and Lewandowski scored which helped to secure Bayern’s 2-1 win and put them at the top of the league table 4 points clear.

He has been playing with Bayern Munich ever since and continues to maintain his top spot in the Bundesliga for the most goals. Throughout his time with the club he has scored a number of hat-tricks against Hamburg, Eintracht Frankfurt and Schalke etc. He also scored 4 goals in a single match in under 15 minutes against Red Star Belgrade during the Champions League 2019.

Robert started his national career playing for the Poland U21 squad in 2008. He only took to the pitch three times for the youth team for friendly matches against England, Belarus and Finland before he moved to a senior spot.

Lewandowski debuted as part of the senior national team just after his 20th birthday in a match against San Marino where he was sent on as a substitute during the 2010 World Cup qualifiers. During this match Lewandowski hit the net to secure a 2-0 win for his nation. Soon after this he made another goal in the qualifiers against the same team to contribute to a 10-0 win.

In a familiar environment at Warsaw, Lewandowski played in the opening match of the UEFA Euro 2012 tournament in a match against Greece. Lewandowski scored the only goal for his country during this match, bringing the score to a 1-1 draw.

Lewandowski scored his first international hat-trick during the UEFA Euro 2016 Qualifiers against Gibraltar which brought the final score to 7-0 for the match. He went on to score another hat-trick within four minutes of the game against Georgia. Robert was also the only player to score in the match against Scotland and secured a 2-2 draw, as well as this he headed the winning goal for Poland in a match against the Republic of Ireland which landed them a spot in the finals.

Despite having an unsuccessful run in the Euro 2016 tournament, Lewandowski scored a hat-trick against Armenia in 2017 during the 2018 FIFA World Cup Qualification campaign. And during the 2018 World Cup games Lewandowski was listed as part of the 23-man squad, but despite playing every minute of all three matches Poland played, he was unable to score which meant Poland did not qualify for the knockouts. He has since taken part in the European Qualifiers for 2020 and we expect to see more from him in the future in terms of representing Poland.

Above we have explored Lewandowski’s journey through his career, but now we are going to look at the statistics and how they have changed throughout the years. Here is a breakdown of his goals to appearances ratios going by club matches and international competitions (excluding friendlies):

As we can see above, Lewandowski scored his highest number of goals in 2016/17 where he netted 59 goals in total during his club games and the World Cup qualifiers. His most successful season which saw him score an impressive number of goals during a limited amount of appearances was also in 2016/17 as he managed to net 59 goals out of 57 appearances.

It is apparent that 2010/11 was not a strong season for Lewandowski as he only managed to make 9 goals out of 43 appearances. Lewandowski is renowned for his high goal tally per season, so seeing the stats for 2010/11 was very surprising. Below we have looked into his history with regards to his goal score rankings in the club leagues. As we can see in this breakdown, Lewandowski has consistently been hitting top 3 since he started his senior career with the exception of the 2010/11 season:

In this part of the post we are going to acknowledge a range of awards and achievements collected by Lewandowski across his career. Below is a list of a few individual awards in which he has received over the years:

During his time with club and national sides, Lewandowski has also broken the following records:

How Effective Do You Think Lewandowski Is?

Throughout this bog post we have explored the vast soccer career of Robert Lewandowski from his junior to senior roles on the squad. Do you think Lewandowski is an effective striker? Let us know your thoughts over on our social media pages today. And you can also pledge allegiance to your favourite player by ordering a Bayern Munich shirt or Poland jersey from our online store – Soccer Box now.