After finishing in second place in the 2013 2014 Italian Serie A, behind only Juventus, AS Roma earned the right to compete in the 2014 2015 Champions League. Unfortunately for fans of the team, the Wolves were drawn into one of the most difficult groups in the entire tournament. They were facing 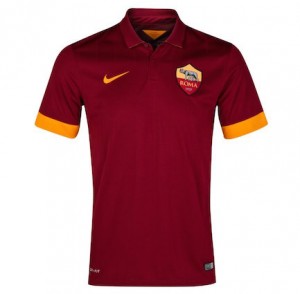 off against Manchester City and Bayern Munich for a chance to progress, and at the end of the day, Roma ended up being the football team edged out of the contest. The good news is that the team is now competing in this year's UEFA Europa League competition, and you can root for them today with a new Roma soccer jersey from Soccer Box!

Whether you are shopping for yourself or even your kids, Soccer Box is the perfect place to go if you are looking to build up a collection of Wolves gear! We have all of Nike's stunning jersey designs for the 2014 2015 season, from the away shirt to the third jersey and beyond. Our stock also includes the AS Roma kids home shirt 2014 2015, a miniaturized version of the red and gold home jersey that Roma players have been wearing all season. The away shirt is also available in a kids size!

Regardless of whether you need a new kids Roma soccer jersey or an adult training shirt, Soccer Box is the perfect the place to shop. It's also the perfect time to shop now, as the Wolves begin their campaign in the 2014 2015 Europa League.

Despite having much success in the world of Italian football, AS Roma has never won either of the big UEFA club competitions. In 1984, they finished as the runners-up at the European Cup (the Champions League), losing to Liverpool in the final. And in 1991, they came in second at the UEFA Cup (the UEL), trailing behind Serie A rivals, Inter Milan.

In other words, AS Roma and their fans are hungry for a big continental tournament victory. And since the UCL is out for 2014 2015, all parties will be more than happy to settle for the UEL. Pick up your AS Roma kids home shirt 2014 2015 to get ready for the football action to come.

After being eliminated from the Champions tournament, the Wolves received a bye into the round of 32 for 2014 2015's Europa contest. There, they were draw against Netherlands squad, Feyenood Rotterdam. Feyenoord, nicknamed "The Stadiumclub," finished second in the Dutch Eredivisie last year.

The first round of 32 fixture between the two teams was the home leg for the wearers of the Roma soccer jersey. The Wolves started things off strong, taking the lead at the 22-minute mark thanks to a goal from Gervinho. The lead was still holding strong at halftime, and it looked as if the home side was headed toward a victory.

However, Feyenoord proved more competitive than AS Roma fans had expected. The Stadiumclub has won the UEL on two previous occasions, most recently in 2002. Needless to say, they're a talented soccer club, and in this battle between two second-place football teams-one from Italy and one from The Netherlands-it all came down to a stalemate.

While fans in the AS Roma kids home shirt 2014 2015 were feeling confident about their team's lead at halftime, that lead didn't last long after play resumed. Only 10 minutes into the second half, Feyenoord equalized with a goal from Colin Kazeem-Richards. The 1-1 score lasted until the end of the game, and the Wolves had to settle for a draw.

Looking at the stats from the game, perhaps the home side was lucky to escape with a tie. The Stadiumclub controlled the ball for more than half of the match, and took a good deal more shots than AS Roma. Luckily for Wolves fans, most of those shots were wide.

Now, it will all come down to the second leg to see which football club progresses to the round of 16. That game-an away fixture for Roma-will be held on Thursday, February 26th. Root for the Wolves today, with a brand new 2014 2015 Roma soccer jersey from Soccer Box.