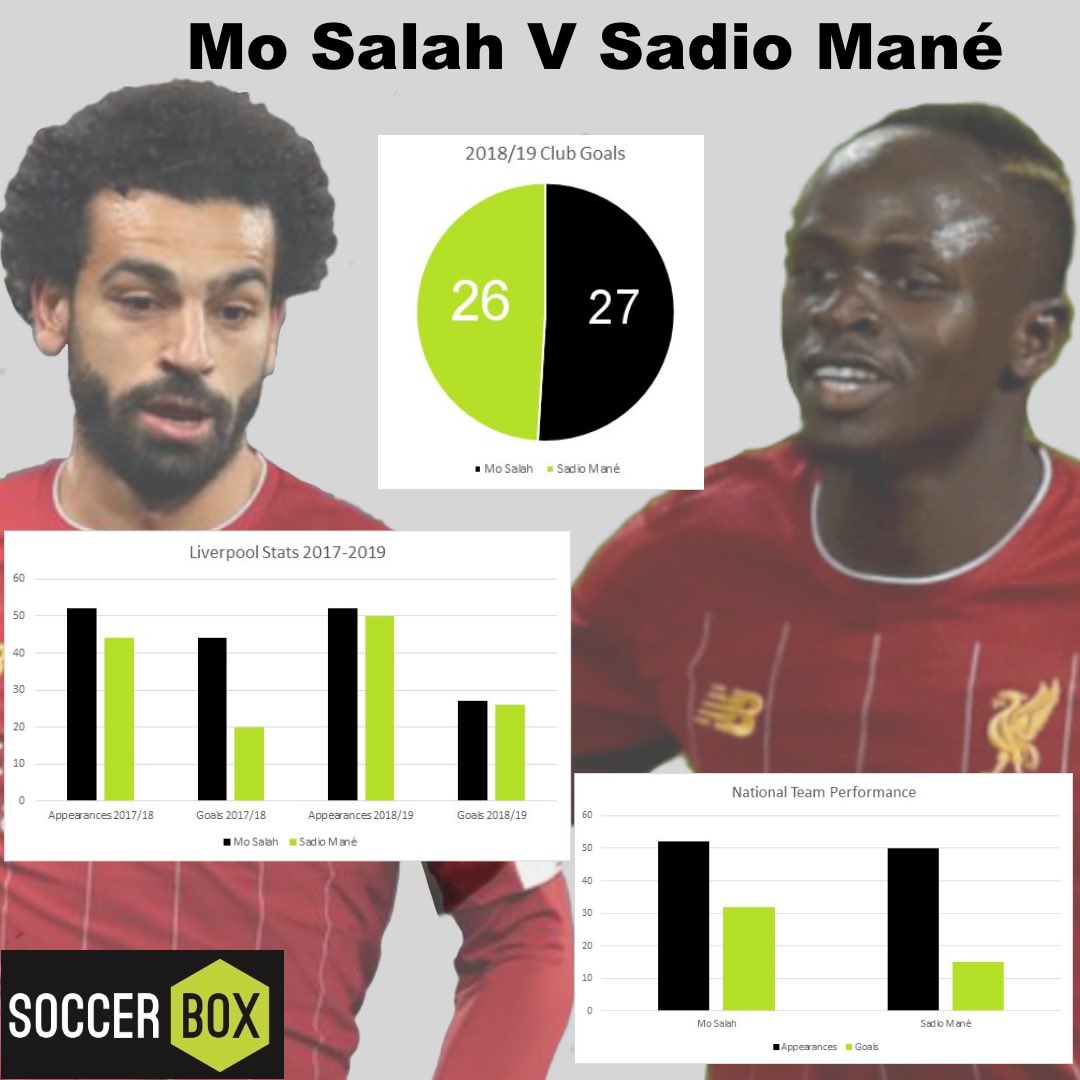 Mo Salah and Sadio Mané are much-loved Winger’s who currently play for Liverpool. They both have a very impressive history with the squad and have helped lead the club to greatness over the years. But how do they compare to one another? In this article we are going to look into how they have performed during the 2018/19 season representing not only Liverpool, but their national teams too. As a result of this, we can see how effective they are when playing together on the pitch. So, if you want to find out more about these two key players, then keep on reading.

Salah’s most impressive match took place against Bournemouth where he scored a hat-trick for Liverpool. As well as this, he also managed to score twice in games against Huddersfield and Crystal Palace. Other than these three occasions, Salah had consistently scored 1 goal. In total Salah netted 22 goals for Liverpool in the Premier League, with three of those being achieved by a penalty.

Next, we are going to analyze the performance of Mané during the 2018/19 Premier League season also representing Liverpool. Mané joined the club a year before Salah in 2016 when he was purchased from Southampton for £34M, so this would be his third season with the club. In the bullet points below we have listed each match in which Mané scored during 18/19 Premier League fixtures:

When looking at these statistics we can see that Mané is able to acquire a number of goals per match comfortably. Out of all of the matches he scored in, Mané made two goals in 6 matches which were against West Ham, Cardiff City, Watford, Burnley, Huddersfield and Wolves. In total, Mané made 22 goals for Liverpool during the season and 2 assists.

Although they play alongside one another during fixtures for Liverpool, when it comes to national tournaments, they often find themselves going head to head. Salah currently plays for the Egypt national team and Mané plays for Senegal. As a result of this, they both have taken part in World Cup tournaments as well as African Cups on the opposite side of the pitch.

First off, we are going to look at their previous performances when representing their country during the 2018 FIFA World Cup:

Unfortunately, both of their national sides did not make it far in the 2018 World Cup, therefore they were only seen on the pitch a handful of times during the knockout stages of the tournament. However, they both have taken part in a number of African Cups, here is the latest stats from their participation in the 2017 tournament:

Going by their latest African Cup tournament stats, we can see that they are still relatively close in goals on the national level as well as club. This is what makes them such a powerful duo when on the pitch together playing for Liverpool.

With them representing their nation in the African Cup, we have seen both Wingers go head to head in a handful of games and here are the results of a couple of fixtures:

As we can see, they were not the biggest of competition when going head to head during international fixtures. However, they have yet to play head to head for their nations since they have been playing for Liverpool.

Above we have investigated Mané and Salah’s performance in detail during the 2018/19 season, but in this part of the article we are going to compare their stats from the past two seasons when both have been playing for Liverpool.

First, we are going to compare their performance in the 2018/19 Premier League. Liverpool finished only one point behind the winners of the Premier League that season, so there is no doubt that their stats would be strong. As we can see, despite a difference of 2 appearances, both Salah and Mané netted 22 goals for Liverpool. However, Salah was on the stronger side in terms of assists as he successfully carried out 11.

Liverpool won the Champions League in 2018/19, but their stats for this league contrast greatly against the results from the Premier League in the same year. Combined they scored an average of 0.59 goals per game in the Premier League and 0.36 in the UCL. Could this mean that they struggle facing international clubs compared to English teams?

Looking further back we can see that Salah received more pitch time than Mané during the 2017/18 Premier League season. And in recognition of this, Salah netted an outstanding 32 goals for the club compared to Mané who only made 10.

And lastly, we are going to compare another Champions League season. Both of their performance in 2017/18 was considerably better than that of the 2018/19 season as they both made 10 goals each compared to the 5 and 4 from the season after. Does this mean that the duo is starting to slip in international club tournaments?

Who Do You Think is The Strongest?

From beginning to end, this post has covered a variety of aspects of Salah and Mané’s performance during the previous season. As we can see, they are considerably stronger when playing together for Liverpool compared to when they go it alone when representing Egypt and Senegal. What do you think about this pairing? Are they an asset to Liverpool? Let us know over on our social media pages and don’t forget to check back at the end of the season for an update on their performance during 2019/20 too. You can also order the latest Liverpool jersey from our online store and cheer your favourite players on this season.