Already, it looks as if Paris Saint Germain will be unstoppable in their campaign to win a fourth straight title in France's Ligue 1. The Parisians have now won seven in a row in the league, following an entertaining 5-0 home win against Toulouse this past weekend. They remain the only undefeated football club on the standings table, having managed 11 wins, two draws, 31 goals, and 35 points in the first 13 weeks of the 2015/16 French Ligue 1 season.

In the context of PSG's dominance, the remainder of the 2015/16 Ligue 1 has already turned into a race for second place. The current runners-up, Olympique Lyonnais, are 10 points back in the standings despite the season being just a third of the way finished. In all likelihood, Lyon and their other close challengers (Saint Etienne, Caen, and Angers) will be fighting for second place in the 2015/16 Ligue 1.

That fact doesn't make the battles between these teams any less notable. On the contrary, with several of last season's top teams struggling to make their mark this fall (Monaco and Olympique Marseille have both turned in middling performances so far), it's interesting to watch the "second tier" of the Ligue 1 standings table come into focus as the season moves forward.

So far, Lyon and Saint Etienne have had the most interesting rivalry of any Ligue 1 pairing. Both teams have spent time this season in the second-place slot and both have enjoyed similar records thus far. In fact, when Lyon and Saint Etienne met head-to-head this past weekend, the two football clubs came into the match with the same point total.

Indeed, the November 8th match between Lyon and Saint Etienne was, in essence, the battle for the Ligue 1's runner-up slot boiled down to a single soccer game. The winner would claim the second place slot while the loser would tumble down the table a bit. A draw, meanwhile, would create an opportunity for another team to move into second place.

In the end, there wasn't much of a battle to be seen in Sunday's head-to-head fixture. Lyon held the home field advantage and dominated the match in every respect, from possession to shots on goal. Alexandre Lacazette, last season's league-wide top scorer, proved to be the deciding factor in the match, scoring a hat trick to give Lyon a resounding 3-0 victory.

Hitting Their Stride at the Right Time: What the Saint Etienne Win Could Mean for Lyon

The win against Saint Etienne is good news for Olympique Lyonnais for several reasons. For one thing, the victory does push Lyon into second place on the Ligue 1 standings table, while also dropping Saint Etienne to fifth. (Caen and Angers snuck into the third and fourth place slots thanks to their wins over the weekend.) Lyon can now breath a sigh of relief, knowing they hold a commanding position in the Ligue 1 during this coming weekend's Euro 2016 break.

For another thing, this match was the first where Lacazette really looked as good as he did for the majority of the 2014 2015 campaign. The 24-year-old forward scored 27 goals in the league last season-eight more than PSG's star, Zlatan Ibrahimovic. Coming into the Saint Etienne match, he'd only tallied two goals all season, thanks partially to the back 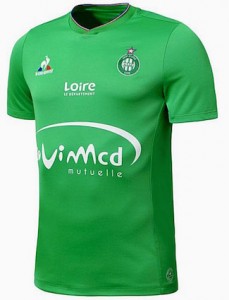 injury that he had to deal with in late August and early September.

Lacazette's hat trick against Saint Etienne propels him singlehandedly back into the list of Ligue 1's top scorers. Though Ibrahimovic has the highest tally in the division this fall, with nine goals in 13 fixtures, Lacazette's total of five is good enough for the top 10. And if Lacazette can repeat that top form in future games, then Lyon really could have a chance of contending with PSG this season.

Are you hoping that Lyon pull out a victory against PSG this season? Or would you rather see Saint Etienne rise to the occasion? At Soccer Box, we have both the Lyon shirt and Saint Etienne jersey 2015/16 available, perfect to help you support your favorite football club!