In late March, qualification play for the 2016 UEFA European Championship will recommence after a lengthy break that has stretched since mid-December. When that happens, the Serbian national football team will be looking to score their first-ever qualification in the prestigious continental 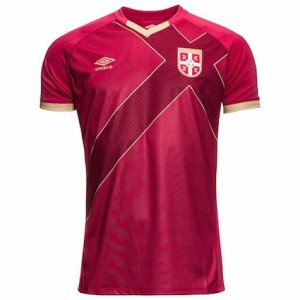 tournament. After a controversial match against Albania in October, the Serbian side will have some ground to make up if they are to qualify. However, you can root for the squad today, with a brand new Serbia football shirt from Soccer Box!

Soccer Box is pleased to offer the latest gear for the Serbian national team! Fans of the Eagles will love these stunning shirt designs from kit manufacturer Umbro. The Serbia home jersey 2014 2015 is a regal red soccer shirt with gold detailing, while the away jersey is a similar shirt that swaps the red backdrop color for white. Both jersey designs will be worn by the team as they work toward European Championship qualification throughout the year.

As far as the world's football-playing nations are concerned, Serbia is relatively new on the scene. Until the early 2000s, they were a part of Yugoslavia. Then, for a few years, they played as "Serbia and Montenegro." Finally, after Montenegro declared independence in 2006, the Eagles began to play as Serbia.

In other words, the Serbia football shirt doesn't have an extensive history. The Eagles did qualify for the World Cup twice-once in 2006, as Serbia and Montenegro, and once in 2010, as an independent nation. In neither case did the club push beyond the group stage.

The country's history in the UEFA European Championship is even sparser. As SFR Yugoslavia, they were two-time runners-up-in 1960 and 1968, respectively. They also came in fourth place on one occasion, in 1976, when they also hosted the event in their home country.

As Serbia, the Eagles have never qualified for Euro, missing out on chances in 2008 and 2012 (and in 2006, with Montenegro). Needless to say, fans in the Serbia home jersey are hoping to see that drought of event participation come to a close in 2016.

For that reason, the 2014 2015 qualifying rounds for next year's Euro tournament have attracted quite a bit of attention from Serbian soccer fans. The wearers of the Serbia football shirt were drawn into Qualifying Group I for the event-a group that also includes Denmark, Portugal, Albania, and Armenia.

So far, the Eagles are in fourth place in the group-though they technically should be in third. The squad has played three qualifying games thus far. They drew the first, tying Armenia 1-1 in an away fixture, but won the second by beating Albania 3-0 at home. Their third qualifier-a November 14th home fixture versus Denmark-concluded in a 1-3 loss.

Based on that record, the Eagles should have four points in the group standings and a goal different rating of +1. That's better than Albania's tally of four points and goal difference of -2. At the moment, though, the Albanian side is in third place, while the Serbs are in fourth.

The seemingly incorrect standings are the result of fan antics at the aforementioned home match against the Albanian soccer squad. For the October 11th fixture, the Eagles donned the Serbia home jersey 2014 2015 and took the pitch at their own Stadion Partizana.

The game began with business as usual, but after a drone flew over the field carrying an Albanian banner, tensions in the stadium exploded. Serbia's home fans rushed the field, attacking the opposing side's players and halting the match at the 41-minute mark. When Albania refused to continue the match, UEFA ruled their decision a forfeit and awarded a 3-0 to the home team.

However, due to the behavior of Serbian fans, the Eagles were docked the three standings points that would have made them strong contenders in Group I. UEFA also called for the Serbs to play their next two home qualification matches "behind closed doors," without fans. That requirement may have hurt the team's momentum in November, when they lost a home match against Denmark.

Will the Eagles be able to find redemption on March 29th, when they play an away fixture in Portugal? Help the team along, with a brand new Serbia football shirt from Soccer Box. Whether you are looking for a 2014 2015 home jersey, or a white and gold away shirt, rest assured that you can find it here!