Europa League finalists last season and narrowing the gap on PSV at the top of the Eredivisie this term, Ajax are unlikely to recapture the glory days of the early-1970s or mid-1990s, but there is a sense they are on the cusp of a new era of success.

Not least because they are able to boast some of Europe’s most gifted young players, all thriving and developing alongside one another. Here are six Ajax youngsters destined for stardom.

Although he has only become a regular starter at the Johan Cruyff Arena this season, 20-year-old De Jong has been regarded as a prospect with elite potential within the Ajax academy system for some time.

A gifted dribbler with sharp vision and textbook technique, the youngster has already become the focal point of the Ajax senior side this term, the player through whom all the team’s attacks begin.

Most comfortable in central midfield, De Jong, whose ability to ghost past opponents and effortlessly play defence-splitting passes is reminiscent of Danish legend Michael Laudrup, has featured regularly as a centre-back recently. From this deeper role he is able to see the whole pitch in front of him, striding forward with the ball and conducting play, contributing seven assists from 16 Eredivisie games in 2017/18.

Already linked with a move to Barcelona, De Jong has the skillset to replicate the role Xavi excelled in if he were to make a switch to the Camp Nou. 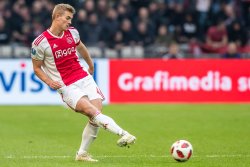 Still only 18 and already a full Holland international, De Ligt is one of the most outstanding defensive talents in Europe. Like De Jong, he is also the subject of interest from Barcelona, having impressed so much since his emergence at senior level last season.

At 6ft 2ins and likely still growing, De Ligt is strong aerially and already possesses the physical gifts to excel in his position at the highest level, but it is his intelligence, anticipation and ability with the ball at his feet that sets him apart.

Despite Ajax ultimately losing 2-0, De Ligt was outstanding against Manchester United in last year’s Europa League final. Partnering Davinson Sánchez, now of Tottenham Hotspur, the youngster demonstrated his ability to break the lines of the opposition with incisive forward passes, while also having the maturity without the ball to know when to drop deep to cover his more aggressive partner – a trait emphasised of late when operating next to De Jong, who is invariably the man to step forward into midfield.

Another Ajax teenager who burst on to the scene midway through last season is winger Justin Kluivert, son of former Barcelona and Holland striker Patrick Kluivert.

The rapid 18-year-old is capable of playing on either flank, has two great feet and is a dynamic and unpredictable dribbler. Finding the majority of his early game time on the right side of the Ajax attack, he has cemented a regular berth on the left this season, displacing Germany international Amin Younes in the staring line-up.

Wanted by Manchester United, Kluivert has five goals and two assists to his name this term, including a stunning hat-trick against Roda in November, each strike of which was of the highest individual quality.

If he can make the required improvements in his consistency and decision-making, Kluivert will be one of Europe’s most dangerous wingers.

V
an de Beek, 20, might not be as flashy or eye-catching as some of the other youngsters in the Ajax side, but the one-cap Dutch international midfielder has assimilated seamlessly into the first team at the Johan Cruyff Arena, replacing former captain Davy Klaassen, who joined Everton last summer.

Klaassen was the leader and driving force from midfield for Ajax, contributing steel and goals in his box-to-box role. His £24 million sale to the Toffees would have been a real blow for Ajax were in not for Van de Beek’s ascension.

With energy, discipline and technical quality, the 20-year-old academy graduate looks completely at home alongside Lasse Schöne and Hakim Ziyech in midfield, and he already has seven league goals to his name in 2017/18, the most recent of which breaking the deadlock in Ajax’s 2-0 win over bitter rivals Feyenoord. 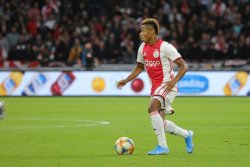 Neres signed for Ajax from Sao Paulo in January of last year in a €12 million deal. The Brazilian winger split his time between the first team and the Jong Ajax side last season as he was allowed to gradually adapt to his new surroundings.

It was an astute development plan put in place by Ajax and they are now reaping the rewards. Neres has been arguably the Eredivisie’s standout performer so far this term, returning eight goals and nine assists in 17 appearances.

Starting on the right wing, the 20-year-old is a threat to the opposition both when coming inside into central zones with the aim of shooting for goal, or attacking his full-back around the outside and looking to create chances for team-mates.

Now linked with a £40 million switch to Spurs, everyone around Europe has sat up and taken notice of Neres, whose thrilling performances might yet see him force his way into Brazil’s squad for the 2018 World Cup in Russia.

Voted Dutch Football Talent of the Year after scoring 23 goals in 47 games for Ajax last season, Danish striker Dolberg has had to content himself with somewhat of a reduced role in Amsterdam this term.

The return of veteran centre-forward Klaas-Jan Huntelaar last summer has meant Dolberg is no longer a guaranteed starter for Ajax, making eight of his 18 Eredivisie appearances this season from the bench. And while the 20-year-old is yet to hit the heights of 2017/18, scoring just four league goals to date, he remains one of the brightest talents on the continent.

A four-cap senior Denmark international, the youngster has been the subject of intense transfer speculation over the last 12 months, but such talk has quietened of late. There should be no rush with Dolberg’s development, though, and studying at the feet of former Real Madrid and AC Milan striker Huntelaar should serve his long-term prospects well.


This article was written for Soccer Box by Ryan Baldi. Here at Soccer Box we proudly supply football shirts, kits and accessories for an array of teams including the mighty Ajax!