21st December 2017.
Unveiled in 2017 during the World Cup qualifiers, this Spain home strip has already captured the eyes and hearts of supporters. After making it through to the 2018 FIFA World Cup, fans are guaranteed to see this kit worn by their cherished team on the pitch for a long time yet. A bright and bold colour choice for this home kit, beams ultimate pride and ensures that the fans and players
alike, will be easily visible and stand out in the crowd.

Inspired by the Spanish flag, their home jersey has been designed using a red base colour with yellow and blue accents. By focusing on this palette, this Spain home strip reiterates the uniting passion and pride between the club and the country.

Located in the centre of the chest in yellow embroidery, is the Adidas logo. Across from this on the left, woven with honour, is the Spain crest in a yellow outline. Also, stitched onto the shoulders of this shirt are the three stripes of Adidas in yellow fabric.

As well as this, there is a diamond printed design running along the right hand side of the torso, which features the yellow, navy and red colour scheme. Originally, when this pattern was first seen during the 1994 FIFA World Cup, it was printed in navy and
yellow. This colouring matches that of the House of Bourbon accent highlighted in the centre of the Spanish coat of arms.

Manufactured to maintain a fresh and comfortable experience for the wearer, the Spain home shirt 2017/19 has Climalite technology incorporated into its material. Enabling the speed increase of the evaporation process, this fabric helps to alleviate excess perspiration from the surface of your skin. This in turn, ensures that the likelihood of moisture build-up is dramatically reduced.

For 2018, Spain has reintroduced their infamous blue shorts which were last seen during the 2010 World Cup which took place in South Africa. After taking a brief tournament break in 2014 where the team wore a full red kit, it is refreshing to see the bright 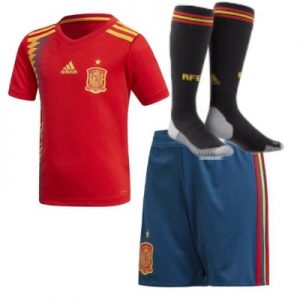 Designed in the reverse colour scheme to the jersey, the shorts sport a blue background colour with yellow and red stitched
details. Stretching from the waistband down to the hemline, on the side of either leg, are the signature stripes of Adidas in the colour pattern; red, yellow, red. Woven onto the bottom of the right thigh, is the Spain crest in a yellow and red woven patch.

To complete the Spain home kit, the socks have a black background with yellow and red accents. Around the cuffs are the Adidas stripes and on the front are the letters 'RFEF' which stand for 'Real Federacion de Futbol'. Translating to 'Real Spanish Soccer Federation' these socks display pride for the team without having to showcase their crest.

Strategically placed cushioning has been used on this pair of socks to help protect the foot while playing the contact sport. Protecting the arches and ankles in particular, these socks have also been designed to contour to the shape of the left and right foot for optimum comfort and to enhance performance.

This article was written for Soccer Box by Loren Astbury, where you can shop for the official Spain home kit and other team merchandise.