The Spain national football side will play one more competitive game in the calendar year of 2014: a qualifying round fixture with Belarus. The outcome of the match is expected to swing in Spain's favor, given the team's current status as two-time 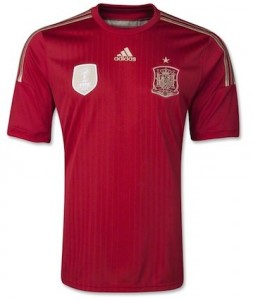 consecutive reigning European Champions. However, after a loss back in September against Slovakia, many are wondering if the Spain football kit 2014 and the players wearing that kit have what it takes to win a third title in a row.

The doubts about Spain's chances aren't all that surprising, given the team's fairly dismal performance at this summer's World Cup in Brazil-another football event at which the Spaniards were the defending champions. Still, high scoring wins in other Euro 2016 qualifying matches (against the likes of Macedonia and Luxembourg) are rightfully keeping hope alive for the Spanish side. You can support the country's play for a third consecutive European title with a new Spain home jersey 2014 2015, available at Soccer Box!

Spain's loss against Slovakia brought back some of the disappointment and lack of faith that was prevalent at the World Cup this summer. However, the Spanish soccer team has proven in other qualification fixtures that they still have what it takes to win big, both in the home kit and the away jersey.

For example, in the first set of fixtures for Euro 2016 Qualifying Group C, players and fans alike wore the Spain home jersey 2014 2015 for a thrilling 5-1 victory against Macedonia. Playing in front of appreciative crowds in Valencia, the soccer squad worked together for every minute of the game, with all five goals being contributed by different members.

The soccer squad looked every bit as explosive in the Spanish away kit just a few weeks ago, winning 4-0 in a game against Luxembourg. Two of the players who had scored points in the Macedonia match-Manchester City's David Silva and Valencia's Paco Alcacer-provided contributions here once more.

Diego Costa (a star striker in the midst of a banner year at Chelsea football club) and Juan Bernat (a young Valencia winner who is donning the Spain football kit 2014 for the first time ever in these qualifiers) scored the other two points. They join Sergio Ramos, Sergio Busquets, and Pedro as the Spanish players who have delivered one point apiece in the Euro qualification rounds.

On the Losing Side

Unfortunately, Costa, Ramos, and the rest of Spain's attacking lineup couldn't break the momentum of Slovakia, a national side that is currently enjoying an unexpected winning streak. Indeed, Slovakia has won all three of its matches in Group C so far-a fact that puts the Slovakian jersey at the top of the table.

Of Spain's entire lineup, Paco Alcacer was the only player in a Spanish football kit who could find the back of the net in the Slovakia match. The Spaniards worked pretty good defense during the game, holding the Slovakian side to only two points. Still, the match was a shocking loss for a team that has won two European Championships and one World Cup in the past six years.

Slovakia's dominance in Group C would be surprising in and of itself, even without the defeat of a global heavyweight like Spain. However, considering the fact that Slovakian jerseys have never made an appearance in a Euro tournament, the strong performance is downright baffling.

The team showed similar strength at the World Cup in 2010, making it to the round of 16. However, a missed qualification in 2014 had most football fans labeling Slovakia as an also-ran before qualification play had even begun.

Of course, there is plenty of time for things to change and for the Spanish side to reclaim the top slot in Group C. In November, players will again wear the Spain home jersey 2014 2015 for a game against Belarus-a match that should give them another chance at a hefty tin. Still, the Slovakians will have to drop a match somewhere if the Spanish jersey is ever going to be able to overtake, and based on the team's brilliant performance so far, it's hard to say when that will happen.

Do you think the Spanish side can topple Slovakia, win Group C, and defend its Euro 2008 and 2012 titles? Support their plight to do so with a new Spain football kit, available now at Soccer Box. Choose a home kit, an away jersey, or both!