Tottenham Hotspur suffered its worst loss of the 2014 2015 Premier League thus far, a defeat that will have the club going back to the drawing board to figure out what went wrong. Despite the loss, though, Tottenham has played a fairly strong 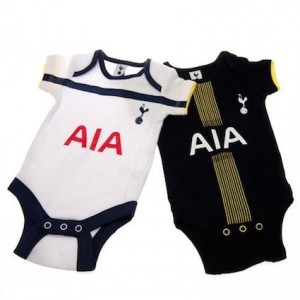 football season thus far, and you can expect them to be back in the division top 10-if not in the top five-by the end of the year. Show your support for the team with new gear from Soccer Box, from adult jerseys to Spurs infant clothes!

That's right: Soccer Box has Hotspur football clothes available for the whole family. From adult training clothes to Tottenham Hotspur baby bodysuits 2014 2015, we really do have items for every age. Whether your child is an infant or a young kid, it is never too early to plant the seeds for lifelong football fandom! Parents will love these baby bodysuits, too. The package comes with one white home kit and one black away kit, fashioned in the likeness of Spurs soccer jerseys!

Such lifelong fandom will continue among Spurs devotees, despite the squad's harsh loss against Manchester City last weekend. Man City striker Sergio Aguero dominated every part of the football game, scoring four goals and giving his club a lead that Tottenham simply could not overcome. A goal by midfielder Christian Eriksen put the Spurs on the board, but the soccer match still ended 4-1 in favor of the Citizens.

A harsh loss like that one might normally cause a drop off in popularity for products like the Tottenham Hotspur baby bodysuits 2014 2015 and other team clothes. However, Tottenham has had a good fall thus far, meaning that fans old and young will continue to stand by the football squad as the 2014 2015 Premier League progresses.

The loss was the third that the Spurs have weathered since the start of the soccer season. The first came in a late August soccer match against Liverpool, which Hotspur lost 3-0. Unfortunately, the game was at home, a sad disappointment for fans.

Fortunately, though, Spurs fans have had plenty to be excited about this season-meaning that parents will continue dressing their kids in Spurs infant clothes or baby bodysuits for the foreseeable future. Indeed, the Lilywhites launched the 2014 2015 Premier League with two straight wins, including a rousing 4-0 victory against Queens Park Rangers.

Spurs also recently won a fixture against Southampton, a big deal since that club is one of the top teams in the division this year.

Last season, Southampton finished back at eighth place on the division table, two slots behind Tottenham. This year, though, the squad is in third place and has only lost two games. One of those was with Liverpool, the runner-up from the 2013 2014 Premier League. The second was the recent defeat from the Lilywhites.

Parents were surely proud to dress their infant children in the Tottenham Hotspur baby bodysuits 2014 2015 after the Southampton win. It wasn't a high-scoring match. Christian Eriksen scored the only goal of the match at the 40-minute mark.

However, a 1-0 win over Southampton this season shows that the Spurs have some true potential to bust into the upper echelons of the division standings table this year. Few squads have as much momentum going this season as Southampton. If Tottenham could build some momentum of their own, there's a possibility that we could be seeing the team in the top five slots of the division come May 2015.

The idea of seeing Hotspur in the peak five positions of the 2014 2015 Premier League isn't so unlikely. Last year, the team finished in sixth place, and from 2010 through to 2013, they flitted between fourth and fifth place.

The odds of Spurs returning to a peak position are increased given the fact that many of the league's most dependable teams are struggling this year. Arsenal, Liverpool, Manchester United, and Everton are all having slower than average seasons. In other words, it could be the perfect time to invest in Tottenham Hotspur clothes, from infant and kid bodysuits to adult jerseys. This club is on the upswing.

Get your hands on new football gear at Soccer Box! Whether you are looking for Spurs infant clothes, like baby bodysuits, or 2014 2015 home and away shirts, we've got you covered.Â