Will We See The Spurs Soccer Jersey In The UCL Next Season? 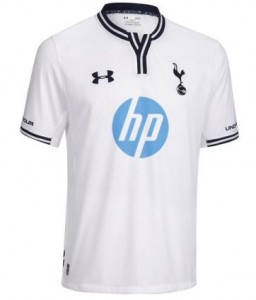 the past few seasons we have seen multiple football clubs develop into potential title winners but as of yet none have won it.

At the end of the 2012-2013 Manchester United claimed their Premier League status back after losing out to rivals Manchester City the year before.

One team who have progressed rapidly over the last couple of seasons is Tottenham Hotspur.

You may see young children in Spurs kits and you may even notice baby's wearing Tottenham Hotspur baby clothes.

The popularity of the Spurs soccer jersey grew and grew and last year was one of the biggest selling years for the club.

Under Armour who manufactured last season's shirt are a new brand to UK but blew the public away with their stylish design released last year.

One man that the supporters could not wait to see in the jersey was Gareth Bale.

The 24 year old played a huge part in the Tottenham Hotspur team. He moved to Spurs in 2007 from Premier League club Southampton for £7 million pounds.

He did start as a left back but after spending enough time with the club and manager he found his best form when he played as a winger and that's how it stayed.

The Welsh international helped the team to finish in high places in the Premier League table which all started in the 2009-2010 season.

Spurs finished in fourth place ahead of the likes of Manchester City and this was one of the months when Bale was awarded the Barclays Player Of The month for April 2010.

He was also offered a new four year contract which he and the fans were very pleased about.

That season after all their hard work in the Spurs soccer jersey, we saw the team reach a Champions League qualification place for the first time in the club's history.

Unfortunately the club did not manage to go far enough to be in with a chance of winning the competition.

The 2010-2011 season saw Spurs finish comfortable in 5th place, lower than the season before but very good when you look at the club's Premier League history.

Things were looking up in the 2011-2012 season when they finished in fourth place again but they did not manage to qualify for the UCL that time.

Bale carried on scoring goals for Spurs and netted more than ever in the 2012 - 2013 season reaching a tally of 21 in total, Spurs finished 5th in the league.

That season he attracted a lot of attention from other clubs including from the Premier League. Huge Spanish club Real Madrid spoke of their interest in signing the winger.

At first manager Andre Villas-Boas was not having any of it. He spoke numerous amounts of times to the media and repeatedly stated that Bale would not be leaving, so the fans just had to hope he would not leave.

Fears increased as a reports surfaced with Bale stating that for him to play for Real Madrid would be his childhood dream.

Soon the fears became reality and Real Madrid announced that they were signing Bale for a record-breaking £85.3 million pound deal.

The fans and club were sad to see him go but knew that his heart would not be in it as his desire to play for the Spanish club had grown.

So it was now up the team to show us that they were not a one -man team with Bale in the squad and we would get to see how they played without him.

With the money off Gareth Bale's sale Andre Villas-Boas and the board spoke about possible signings and in the end they signed 7 new players that would start in the Spurs soccer jersey during the 2013 - 2014 season. These were :

These players cost over a million pounds in combined price, however some have failed to live up to their big price tag.

Striker Roberto Soldado in particular, he was brought in by the club who were hoping he would bring in the goals they would be missing after Bale's departure.

There problems lye with the lack of goals. Some blame this on Soldado, some blame it on other players not giving him the service he needs.

To qualify for the UCL again we need to see more goals hitting the back of the net.

Do you believe Spurs can win this weekend against Manchester United?

This may give them the confidence they need to keep a good run of form.

Maybe you believe that Spurs cannot challenge for a Champions League spot this year.

If you support Spurs then why not check out Soccer Box. Their website is www.soccerbox.com. Visit this great online sports store and find an amazing selection of official merchandise.

You can buy the new Spurs soccer jersey, or a kids football kit or your child loves the club.

Tottenham Hotspur baby clothes are also available if you want to start your little ones supporting early!