It's a big soccer season for many reasons. For FIFA, this summer is going to be monumental simply because it is a World Cup year and because countless people will be descending upon Brazil in mid-June to watch the best football teams on the planet 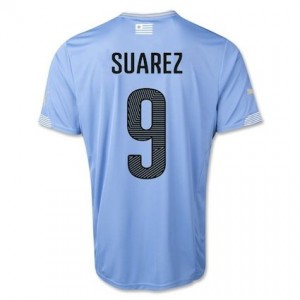 play against one another. It's a big season for Uruguay because their team is currently ranked at number 6 of this year's competitors by FIFA. It's also a big season for Liverpool football club because the team just came closer than ever to attaining a title in England's Premier League. For fans looking to follow all of these narratives at once, Soccer Box has the perfect product: the Suarez 9 Uruguay 2014 World Cup home shirt.

What is this special Suarez Uruguay soccer jersey, you may ask, and why is it such a special product at the Soccer Box online store? The jersey a pale blue Puma shirt with the number nine on the back will be worn at this year's World Cup by famed striker Luis Suarez, who is widely considered one of the best football players on the planet, and who is a member of both the Uruguay and Liverpool teams.

If you've paid much attention to either the Uruguay national team or the Liverpool football club in the last few years, then chances are you know why the Suarez 9 Uruguay 2014 World Cup home shirt is a hot commodity item leading up to this summer's World Cup. For one thing, Suarez made a big impression at the 2010 World Cup in South Africa, becoming one of the big stories of the tournament for both his scoring and his controversial actions.

First, the scoring: Suarez delivered key moves throughout the group stage to allow the Uruguay national football team to advance to the knockout stage for the first time since 1990. In the round of 16, during a match against South Korea, Suarez scored both of the goals for Uruguay, winning the match for his team with a final score of 2-1.

Suarez truly became a memorable wearer of the Uruguay soccer jersey in the quarterfinals, though, when a close match against Ghana barreled into extra time. Instead of letting a shot from the opposing team reach the goal, Suarez blocked it with his hands, earning a red card that disqualified him from playing in the semifinals, but which gave his team the chance to seal the deal in a penalty kickoff.

Following the handball call, Suarez became one of the most controversial players in the history of football a fact that will undoubtedly create mixed feelings for products like the Suarez 9 Uruguay 2014 World Cup home shirt this summer. On one hand, he was hailed as a hero for sacrificing himself to give his team one more chance at victory. On the other hand, he was vilified for a cheap maneuver that stole the victory right out from under Ghana.

The controversy was only further magnified by the fact that Ghana was the last African nation in contention by the quarterfinals of the 2010 World Cup. Since the event was hosted in South Africa, the entire continent was cheering for Ghana. Had Ghana won the game against Uruguay, it would have been the first time that an African team had managed to make it to the semifinals.

Perhaps it was Karma that lost Uruguay the semifinal match against the Netherlands. The team was also defeated in the third-place consolation match, perhaps because the crowd booed every single time Suarez took the field in his Uruguay soccer jersey. Still, Suarez undoubtedly played a big role in getting Uruguay to the semifinals of the 2010 World Cup, and if he had actually played in the game, things might have turned out differently.

This summer, Suarez will still be a controversial topic of conversation for football fans, but he will likely have more help from the crowd than he did in Africa. Will he lead Uruguay to a championship match? We will see over the course of the next two months, but for now you can stop by Soccer Box and buy a Suarez 9 Uruguay 2014 World Cup home shirt.