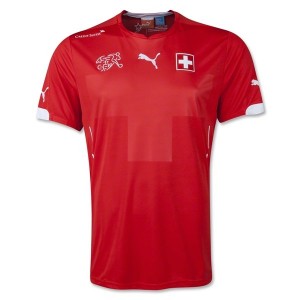 The last Group E games of the 2014 FIFA World Cup took place yesterday. Prior to kickoff Switzerland was sitting in 3rd place, in need of a win against Honduras, and reliant on Ecuador losing to progress to the knockout stage. The results went in their favor and the Switzerland football shirt, alongside the France soccer jerseys will progress further into the tournament.

The group stage may be coming to and end but the action in Brazil is heating up. At Soccer Box we have all the 2014 World Cup football shirts you need. The Honduras soccer jersey may be taking no further part but their heroic efforts may inspire you to shop for a shirt in preparation for their next game. Alternatively, the Switzerland home and away kits and France football shirts are in stock for Group E enthusiasts.

Ranked at 33 by FIFA Honduras was always the least likely team in Group E to escape the group stages. Their 1st game against a strong French team resulted in a 3-0 loss; similarly the team succumbed to the Ecuador team losing 2-1. Honduras would have liked to take home their 1st ever World Cup win but Switzerland was eager to progress and not willing to give up the fight.

The Swiss football team had it all to do against Honduras at the hot and humid Arena de Amazonia in Manaus. The team wearing the Switzerland football shirt managed an unconvincing, 1st match win against Ecuador, and lost against France in a spectacular 7 goal frenzy that ended 5-2 to the French.

The results of the initial 2 rounds of matches meant that the only shirt definitely not appearing in the later stages of the tournament was the Honduras soccer jersey, those of France, Switzerland and Ecuador all stood a chance. It was fair to say that the France teams impressive goal difference almost certainly ensured their place in the Round of 16. An uneventful 0-0 draw against Ecuador ensured France finished top of the group.

The games were played concurrently and the Swiss team knew that if Ecuador won or drew a win was their only option to secure a place in the Round of 16, and win they did. The number 23 Switzerland football shirt of Xherdan Shaqiri ensured the win.

Shaqiri opened the scoring after only 6 minutes of game play, and what a goal it was. He hit the ball from the edge of the box, it curved stylishly, hit the underside of the bar and into the net. A fantastic opening goal! In similar style Shaqiri tricked the goalkeeper into thinking he would shoot then slotted the ball in the opposite side of the net putting the Switzerland team at 2-0 after 31 minutes.

Determined not to go home without a single point Honduras played much better in the 2nd half, but the Switzerland teams determination was stronger. Shaqiri's 3rd goal came at 71 minutes, there wasn't the flair and style of the 1st two goals a straightforward hit sealing the fate of the Honduras soccer jersey and his team's progression to the knockout stage.

The Switzerland team last made it out of the group stage in 2006, and their best finish to date was a quarterfinal finish in 1934, 1938 and 1954. Getting to the Round of 16 in the 2014 FIFA World Cup is momentous for the team and fans. However, by finishing 2nd in the group their chances of further advancement have dropped significantly.

The second place team in each group plays the 1st place team in their partner group, for Group E this is Group F. Unfortunately, for Switzerland this means a knockout tie with Argentina, not a prospect many teams would be relishing.

Argentina has won 2 World Cup tournaments to date, and is certainly looking for victory so close to home in Brazil. They have won all of their group matches, and are not even playing at their best. Traditionally Argentina start slow and build momentum, not a promising thought for the Switzerland national football team.

You can catch this next installment on 1st July. If you think the team has what is takes order your Switzerland football shirt online at Soccer Box. Remember, we still have plenty of World Cup soccer jerseys available.