The Unveil Of The New Manchester City Home Football Shirt 2013-14! 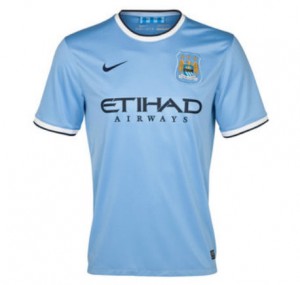 Many of the brand new Premier League football kits are being revealed now and the new Manchester City home shirt has now been unveiled by the club. The shirt is very nice, it has a classical look to it with added simplicity, however this is certainly not a boring shirt and you can tell that Nike have put in great effort to design it. The quality of the material is fantastic and feelsÂ like it is worth theÂ price it retails for. We feel that the City fans will really like the new kit and will enjoy maximum comfort whilst wearing the new design.

The Blues sadly missed out on the title at the end of the 2012 season; closest rivals Manchester United already had a large lead in the middle of the season and ended it 11 points ahead of City. Second place was still a massive achievement for the team; however it would not have felt the same for the squad and supporters after winning the title last year when they came in first place after not winning the league for 44 years. Umbro designed Manchester City's kits for the first time in 1975, they went on to bring out a new kit for the club every season up until 1997 when Kappa made the next design. Umbro did not make any of the Blue's kits again until 2009 when they returned toÂ City and released a brand new style. The English sports brand were very successful and designed nice kits, they are also the former makers of the England football kits, which have now been taken over by brand giants Nike.

The same thing happened again here,Â it was now the turn of big American sports brand Nike to take over and see what Manchester City football jersey they could design. Many supporters were excited at the thought of the brand taking over and had soon forgotten all about Umbro. The new 2013-14 home shirt is very attractive, the same traditional light blue colour has been kept the same with some navy and white details added. The collar is a crew neck design, it is mainly white with a navy trim on the inner edge. The Manchester City badge is embroidered on the left side of the shirt and there is a stitched navy Nike swoosh logo opposite. The Etihad Airways sponsor has stayed the same and is printed in navy in the centre. This is a very modern design by Nike and already has some great reviews from the public.

As well as their new home jersey being released, more big news for City supporters was the appointment of new manager Manuel Pellegrini, the 59 Year old has joined the Blues after ending a contract with Malaga. We feel that the new coach will bring in some great new players as well as get rid of some of the less-needed ones. Carlos Tevez is one of the first to leave the club, City and Juventus agreed on a £12 Million price and the striker is now on his way out of the Etihad Stadium for good, his time at the club has been very up and down, arguments with former boss Roberto Mancini had a lot to do with this. You never know the hot-headed striker may have got on well with new boss Pellegrini. TheÂ sky bluesÂ are said to have been interested in Napoli's Edinson Cavani as a replacementÂ but the Italian club will not take any offers under their £53 million price tag and City do not want to pay that. We will see what lies ahead, will the brand new Nike Manchester City Home Football Shirt bring any luck this year and will the Blues beat their closest rivals Manchester United to the title who are this season withoutÂ formerÂ fantastic manager Sir Alex Ferguson?

What are your opinions on the new Manchester City football jersey? Do you think this design is better than previous by Umbro?

Emily writes exclusively for Soccerbox, here you can buy your very own Manchester City merchandise including the latest football shirt.