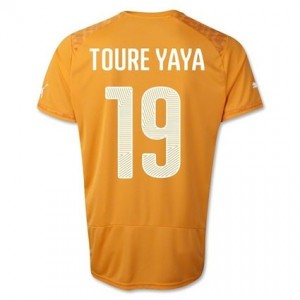 When Yaya Toure takes to the field for the first time in this summer's FIFA World Cup, wearing his Toure 19 Ivory Coast 2014 World Cup home shirt in the Ivory Coast's opening match against group stage opponents Japan, he will hopefully be riding high on a wave of recent success. Just recently, Yaya Toure's club team, Manchester City, clinched England's Premier League division title for the second time in just three seasons. That fact, combined with what will be Yaya Toure's third World Cup appearance with the Ivory Coast national soccer team, should inspire this star midfielder to the highest heights his career has seen yet.

Fans who want to be a part of Yaya Toure's hat trick World Cup euphoria should stop by the Soccer Box online store today to check out our selection of Ivory Coast football jerseys. The aforementioned Yaya Toure home jersey is an orange Puma shirt made with comfortable dryCELL technology and boasting both the traditional Ivory Coast "elephant" logo and Yaya Toure's name and jersey number (19) on the back.

It is likely that many of the Ivory Coast team's fans will be wearing the Toure 19 Ivory Coast 2014 World Cup home shirt during their team's group stage matches this year, all in the hopes that Yaya Toure will finally get to see a World Cup knockout stage.

When Yaya Toure made his World Cup debut in 2006, it was not just a big moment for the young midfielder, but it was also a massive milestone for the Ivory Coast as a whole. 2006 was the first year that the Ivory Coast national team had ever managed to qualify for the World Cup. Second and third consecutive qualifications for the 2010 and 2014 tournaments have proven that the Ivory Coast team has an x factor at work today that it has never had at any other point in its history.

In the eyes of many, that x factor is Yaya Toure himself, who has built quite an impressive career for himself over the past decade and a half both while wearing the Ivory Coast football jerseys and while donning the colors of other teams.

In addition to the Ivory Coast national team and the Manchester City soccer club, Yaya Toure's storied career has taken him to several other teams as well. In the 2006 2007 season, he played in France's Ligue 1 as a part of the Monaco team, while the next phase of his career brought him to Barcelona, where he played a role in a banner 2009 season that saw a UEFA Champions League title and numerous other high-profile trophies.

Most notable, however, has been Yaya Toure's time in the Ivory Coast football jerseys. He's played as part of the national team since 2004, appearing in more than 80 games, helping the team win the Africa Cup of Nations on two occasions (in 2006 and 2012), and earning the title of "African Footballer of the Year" for three consecutive years in 2011, 2012, and 2013.

Could Yaya Toure win a fourth consecutive title as the best football player in Africa for 2014? That may depend entirely on the Ivory Coast's performance at this year's World Cup.

This year, Yaya Toure and company have arguably their best chance yet of advancing to the round of 16. The Ivory Coast has been drawn into a group with Colombia, Greece, and Japan. Ranked by FIFA as the fifth best national team in the world, Colombia is expected to sail through to the next round. However, the Ivory Coast (21) and Greece (10) are more evenly matched, and with Yaya Toure in top form, it's possible that the former team could formulate an upset of the latter.

Are you hoping to finally see Yaya Toure gaining the traction he deserves in the World Cup? Stop by Soccer Box today and pick up a Toure 19 Ivory Coast 2014 World Cup home shirt to cheer the team on.