It was a big weekend for local derby games in the English Premier League. On one end of the spectrum, Manchester City and Manchester United battled for the league's top spot, with City ultimately coming out on top-for now, at least. On the other end of the spectrum, Newcastle United and Sunderland competed for a chance to escape the red zone in the Wear-Tyne Derby 2015.

The first Wear-Tyne Derby of the 2015 2016 season showed just how much North East England's football clubs have flopped this fall. Heading into the game, Newcastle United had only won one of their first nine games of the season. Sunderland, meanwhile, hadn't won any games. Sunderland were in dead last place, with only three points from the first nine fixtures. Newcastle United weren't doing much better, sitting in 18th with six points.

Stuck in the Red Zone

Both football teams were in desperate need of a win at this game, making it a high-stakes fixture despite the sad state of affairs at both clubs. A win for Newcastle could have boosted the Magpies to 16th place and given Steve McLaren-a new club manager for the 2015 2016 season-a few extra weeks of job security. A win for Sunderland, meanwhile, would have at least saved the club from the embarrassment of going winless for 10 weeks of Premier League play.

The match was ultimately a bizarre one, as Newcastle's on-field stats should have translated to a win for the Magpies. Indeed, McLaren's squad led the game in possession (58%, to Sunderland's 42), shots on target (eight to one), and shots wide (seven to zero).

Sunderland weren't just poor during the first half of the match; they were awful. As the stats reflect, the Black Cats rarely even got near Newcastle's goal, let alone made any threatening attacks on it. But things began to unravel for the Magpies when referee Robert Madley showed Newcastle captain Fabricio Coloccini a red card in the closing moments of the first half.

Coloccini had shoulder barged Sunderland's Steven Fletcher in the defensive area. Most soccer pundits agree that the incident should have earned Sunderland a penalty, but that the red card call was preposterous. Perhaps if Coloccini had picked up a yellow card for a separate incident earlier in the match, the call would have made sense. He hadn't, and it didn't.

Madley gave Sunderland a penalty in addition to sending Coloccini off, and the home team converted the opportunity into a 1-0 lead. They'd score twice more in the second half, against Newcastle's handicapped 10-man squad, to win the soccer game decisively.

Good Luck for the Black Cats

Understandably, many Newcastle football fans feel that Madley handed the game to Sunderland on a 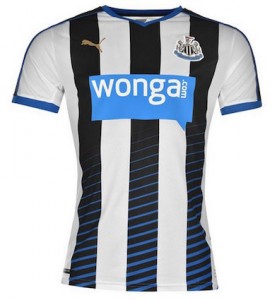 silver platter. By forcing the Magpies to play one man down and without their captain during the second half, Madley gave Sunderland an advantage that they didn't deserve. To the club's credit, though, they didn't blow the opportunity. Thanks to goals from Billy Jones and Steven Fletcher in the second half, the Black Cats have now won six Wear-Tyne Derby matches straight-a record streak for the rivalry.

The game also gives the Black Cats their first win of the 2015 2016 Premier League and puts them ahead of Newcastle on the league standings table. Both teams now have the same point total (six points from 10 fixtures), but Sunderland have the advantage in goal difference. Most importantly, though, this triumphant win will give the Black Cats greater confidence and momentum going forward. The Magpies, meanwhile, might not have any confidence or momentum left following this loss-though the perceived injustice of the officiating could light a fire in their bellies.

What do you think? Was Madley right to show Coloccini a red card? Or was the call a poor decision highlighting just how much bad officiating can change the direction of a football match? Pick up a Newcastle shirt 2015 2016 from Soccer Box, then find us on social media to share your thoughts. We are active on Facebook, Pinterest, LinkedIn and other popular social networking platforms.