Think Bayern Munich, Juventus, and Paris Saint Germain are impressive for winning three or four national top flight football titles in a row? They've got nothing on FC Basel, who have clinched the Swiss 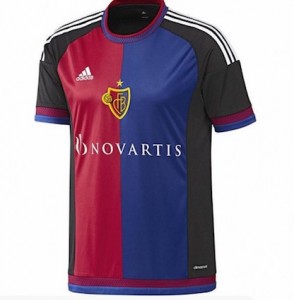 Super League title six years running, and who have won a remarkable 10 titles since the turn of the century. Indeed, in terms of current soccer dynasties, it's hard to compete with the durable dominance of Basel. But with a new manager taking over at the club in 2015 2016, will FC Basel continue to dominate Swiss Super League play and continue their impressive streak? Or will the shakeup give another Swiss soccer squad a chance at the title that no other team has won this decade?

Those are the questions on the minds of fans in the FC Basel home shirt 2015 2016, as they wait to see how new coach Urs Fischer will handle the legacy at St. Jakob-Park. Fischer is taking the reigns at FC Basel following the departure of Paulo Sousa, who will take the head coaching position at Serie A's Fiorentina in 2015 2016.

A Revolving Door of Coaches

The good news is that FC Basel's winning streak has thus far seemed fairly immune to changes at the
management level. Indeed, the team has seen something of a revolving door of coaches in recent years, of which Urs Fischer is just the latest member.

Sousa, for instance, only coached at St. Jakob-Park for a single year. The Portuguese manager came to Switzerland from Israeli football club Maccabi Tel Aviv, had an impressive run at Basel (including a Super League title, a runner-up finish in the Swiss Cup, and a round of 16 berth in the Champions League), and promptly accepted a job with Fiorentina when the offer came along.

Sousa was the rule, not the exception. Since the 2009 departure of Christian Gross-the longtime manager who coached the football team for a decade, from June 1999 to June 2009-Basel has gone through four different coaches:

Why FC Basel Will Keep Winning

Usually, when clubs have so much turnover in the managerial position, it's because they aren't winning games or titles. With FC Basel, it's because the team wins titles that there is so much coaching turnover. Unfortunately, the squad's head coach position has become something of a stepping stone for ambitious managers, who prove they can win at FC Basel and then head off to other clubs for the next stages of their
careers.

The good news is that, over the past six years, FC Basel have succeeded consistently despite managerial changes, and there's no reason to expect that they won't continue their streak under the guidance of Urs Fischer. In fact, if anything, it's Basel that makes coaches look good, not the other way around. That would explain why Fink and Yakin had only brief stints with their post-Basel clubs.

Still, a great coach could only make FC Basel a better team (and perhaps push them to a significant European title), and Fischer looks like he will be a good fit with the Swiss soccer club. He knows the Switzerland football landscape quite well, having spent many years at both FC Zurich and FC St. Gallen during his career as a center back. He also coached at Zurich for three years (one as assistant, two as head coach), and FC Thun (where he just managed a fourth place finish in the Swiss Super League). We're betting he will do good things at St. Jakob-Park.

Stop by Soccer Box today and pick up a FC Basel shirt 2015 2016 to celebrate the arrival of Urs Fischer and root the club toward a seventh straight Swiss Super League title!