Fans of the Zenit St. Petersburg football club have a lot to be happy about right now. Sure, they've only seen their team play six times since December, thanks to the extensive Russian football winter hiatus. But since then the soccer squad has won four of those five games-including three UEFA Europa 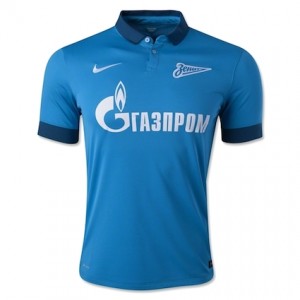 League fixtures-all is undoubtedly well with the Anti-Aircraft Gunners. The club even won their first 2015 league game, beating Ural in a decisive 3-0 home fixture! Celebrate the success today, with a home or away version of the Zenit jersey!

Both versions of the St. Petersburg shirt are available for purchase at Soccer Box. And my, did Nike outdo itself with the club's jerseys this year. The Zenit St. Petersburg home shirt 2014 2015 is a stunning sky blue jersey with darker blue trim on the neck and sleeves. The 2014 2015 away shirt meanwhile, is a striking white jersey with a sash of blue running diagonally across the shirt. Either jersey is perfect for a Zenit supporter.

Now is the ideal time to grab a new Zenit jersey from Soccer Box. Not only is the St. Petersburg club currently riding high off a victory against Ural, but the team also looks like a shoe-in for this year's top-flight Russian football title. Indeed, with 12 games left to go this season, the Anti-Aircraft Gunners are seven points ahead of their nearest challenger-and with a sizable goal difference advantage to boot.

Zenit's last two domestic fixtures have only boosted that goal difference rating higher. The football squad closed out 2014 with a 4-0 home victory against Krasnodar. And to kick off 2014, they donned the Zenit St. Petersburg home shirt 2014 2015 once again, this time to beat Ural 3-0!

The March 7th home match with Ural was one of the most satisfying games of the season for the Anti-Aircraft Gunners. Not only did the away side fail to score a single goal, but Zenit's own Saloman Rondon marked the game as a special one by scoring all three of his team's goals.

Rondon is shaping up to be quite the world-class star for the Anti-Aircraft Gunners. The Venezuelan striker came to St. Petersburg midway through the 2013 2014 season and quickly made an impression. He made ten appearances, scored seven goals, and helped his new football club to a second place finish in the Russian Premier League. Needless to say, fans in the Zenit jersey wondered if the Gunners might have won the championship had Rondon been there the whole time.

Based on the 2014 2015 season, the answer to that fan question is "yes." With Rondon as the leading goal scorer-his hat trick on Saturday moved him to 11 points for the year, and that's just domestic fixtures-Zenit has ascended to the top spot in the division. The soccer squad has so far won 14 games, drawn two, and lost two. That puts them at 44 points in the standings-seven points ahead from last year's champion, CSKA Moscow.

Rondon has also done the Zenit St. Petersburg home shirt 2014 2015 proud in continental and cup play. In fact, just last month, he delivered a brace of goals in a home Europa League match against PSV. The Anti-Aircraft Gunners won that home game 3-0, earning a spot in the round of 16 for the UEL tournament. In the round of 16, they won the first leg, beating Torino 2-0 at home.

Could 2014 2015 see both a Russian championship and a UEL title for Zenit St. Petersburg? Only time will tell. The squad slowed down a bit this past weekend, drawing 1-1 in an away fixture at Torpedo Moscow. However, if Rondon continues scoring braces or hat tricks in future matches, then it's certainly possible that this Russian club could be collecting a few trophies this spring. It would be the club's fifth Russian premier title, and only their second Europa trophy.

Root for the Anti-Aircraft Gunners today, with a brand new Zenit jersey from Soccer Box. Whether you are looking for the home shirt or the away jersey, you can find it here.