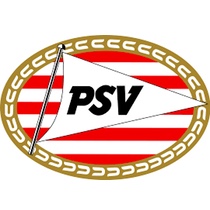 PSV Eindhoven is a Dutch football team, PSV is an abbreviation of Philips Sport Verenining. The club was established in 1913 as a recreational facility for the workers at Philips. To this day the club and Philips are intrinsically linked, as seen by the Philips sponsorship on the front of the PSV Eindhoven football jerseys. Shirt sponsorship was introduced to the Eredivisie in 1982, since this date the Philips logo has consistently adorned the front of the team’s shirts and merchandise.

This is the place to shop for PSV Eindhoven shirts and jerseys, order yours today!

Nike has manufactured the PSV Eindhoven soccer jerseys, kits and training apparel since 1995. The team has worn red and white home shirts since it’s inception in 1913. A red and white striped shirt has been the traditional choice; occasionally an all red home football shirt is launched instead.

PSV Eindhoven has been successful in the Dutch Eredivisie league and has also had some success in Europe winning the European Cup in 1988 and the UEFA Cup in 1978. The club has a significant following both in the Netherlands and the rest of Europe. The PSV Eindhoven shirts sell well both locally and internationally. You can have your PSV Eindhoven football shirt and accessories shipped worldwide when you shop at Soccer Box.

The biggest gatherings of PSV Eindhoven shirts and jerseys are during home matches at the Philips Stadion. The football stadium has been the home of the team since 1913. Several renovations have taken place since to increase the capacity to 35,000. Average match day attendance is around 33,000 fans. The terraces are adorned with red and white football jerseys and accessories as the fans cheer on their favorite team.

The Dutch Eredivisie league features some fantastic teams, as well as PSV Eindhoven you may be interested in the Ajax football shirts that are also available. We stock a large selection of shirts and jerseys for hundreds of different teams.

We pride ourselves on offering our customers one of the best selections of football shirts available online. We are a shirt collectors dream store. To view our whole range you can use the category menu located above to navigate to specific teams to find desired goods.