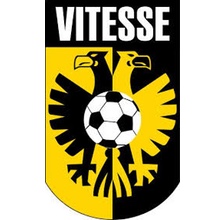 Looking to buy the latest shirt for Dutch Eredivisie club Vitesse? Then you are in the right place. We have recently added the Vitesse football shirts to our inventory, and you can order now in adult sizes. We are supplied directly by Macron and only stock official jerseys. Order online and get ready to cheer on Stichting Betaald Voetbal Vitesse at their next league fixture.

SBV Vitesse, as they are more commonly known, has a long and established history in the Dutch football league. The club was founded in 1892. To date Vitesse has never won the Eredivisie title, but with their most recent success recorded as winning the 2017 KNVB Cup, now is the perfect time to get your shirt and support them in the aim of conquering the domestic league.

Home of the SBV Vitesse Jerseys

Italian sportswear manufacturer Macron is the kit producer for SBV Vitesse. Macron design and produce the home and away shirts, kit and all technical wear for the club. Soccer Box is a licensed stockist, and you can get the latest Vitesse soccer jerseys here.

Yellow and black vertical stripes are the traditional home colours for Vitesse. In recent seasons Macron has updated and revitalized this design by altering the width of the stripes, changing the neckline, and redesigning the sleeves of the home shirt. The fresh new approach ensures that each season’s shirt is a ‘must purchase’ for keen supporters of the club.

Since 1998 SBV Vitesse has played home fixtures at the Geledrome Stadium. This is a purpose built football ground, with modern retractable roof, and convertible pitch. During the football season the stadium plays host to up to 25,000 supporters, many sporting the official Vitesse shirts, kit and merchandise. At other times the stadium plays host to music concerts by artists from around the globe.

Another claim to fame for Vitesse is the fact that they were the first football club in the Netherlands to be owned by a foreigner. Retired Georgian footballer Merab Jordania, along with investment from Alexander Chigirinsky, took over at the club in 2010 after a period of financial instability. In 2013 Alexander Chigirinsky became the clubs sole owner. There have been several investigations into the clubs ownership, due to a tenuous link with Chelsea FC.

Despite no formal link being identified, a close relationship between the clubs respective owners has created transfer opportunities. In fact, several Chelsea players are currently on loan with the club, and proudly wear Vitesse shirts.

We are supplied directly by Macron, and this is an opportunity for you to purchase the latest Vitesse football shirts. We only have limited quantities of each jersey so don’t delay and be sure to order yours today.