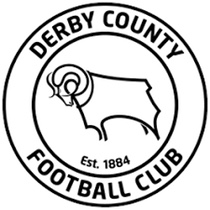 With football jerseys for hundreds of clubs around the globe we have now added Derby County to our list of available products. If you are looking for the latest Derby County shirts, Soccer Box is the place to order from. We have stock of the official Umbro home jersey in sizes to fit both kids and adults.

With a long and storied history Derby may not be top of the ranks of the English football hierarchy, but they have a strong and devout following with the majority of fans based around their Derbyshire home. The club was founded in 1884, and they were one of founding members of the first English football league that was established in 1888. They are one of only 10 clubs to have competed in every season of English football from 1888 to today.

Derby won the top tier football trophy in 1972 and 1975, this has added to the prestige of the club, who finished 5th in the Championship during the 2015/16 season. Promotion to the Premier League, for the first time since 2008, was in reach, however, a disappointing 3-2 aggregate loss against Hull City resigned the Rams to another season of Championship football during the 2016/17 campaign.

Since 2014 Umbro has been the supplier of football kits to Derby County, and you can take this opportunity to order yours while supplies last. Since the 1890’s the color of the clubs home kit has been white and black. However, only the most devout of fans may know that the team originally wore an orange, brown and light blue colored football shirt. Up until as recently as the 1980’s the home shirt often featured blue or red accents. Recent football seasons have seen the Rams wearing a primarily white jersey with black highlights.

Since 1997 the home of the Derby football shirts has been the Pride Park Stadium. This is a purpose built stadium that cost a hefty £28 million to build, and holds a capacity of 33,597 supporters. Prior to 1997 the club had played at the Baseball Ground for 102 years, since 1895. The new stadium allowed a huge increase in the number of fans attending home fixtures, and on match days is packed with white and black shirt clad supporters.

Derby is known as a town where football passions run high. Despite the clubs lack of top-tier action in recent seasons the club draws large numbers of supporters to games, and the white and black tops are an ever-popular way of highlighting allegiance. We order directly from Umbro to ensure we only stock official team merchandise, with competitive prices and fast worldwide shipping you can feel confident when shopping at Soccer Box.

So get ready to cheer Derby County to the top of the 2016/17 Championship table and order the clubs official football jerseys while supplies last. In addition to the Derby home shirt we stock kit and accessories for Premier League and other popular clubs from around the globe, browse our extensive online catalogue today.