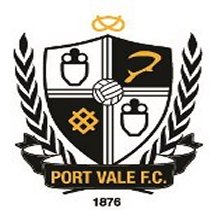 If you are on the hunt for a new Port Vale shirt which is 100% authentic, then you are in the right place. We only stock the genuine Port Vale Football Shirts which have been sourced direct from the manufacturer to confirm their authenticity. Therefore, when you are shopping for a new jersey, you can feel confident that you are investing in the real deal. Browse our vast range of shirts today and take advantage of our international express shipping methods now!

The famous monochrome striped appearance of the Port Vale home shirt came about in 1921 as a result of the club experimenting with the appearance of their kit. They chopped and changed the look of their home jersey by trialling a plain red base, gold and black striped pattern, claret and blue colour way and even red and white stripes too before deciding on their classic black and white appearance. Since then they have still experimented with the look of the home shirt before making a solid decision to keep the monochrome stripes in 1963.

Although the team started playing soccer professionally in the 1920s, they did not have a crest on their jerseys up until the 1950s. The first ever crest for Port Vale was modelled on the Burslem Borough coat of arms by incorporating the scythe of the Tunstall arms, the fretted cross of Audley and the two Josiah Wedgwood pots. However, this emblem was changed to a monogram of the club’s name in 1964 which was then changed in 1981 but another design was not used until 1983. This new crest had a bottle oven and the Staffordshire knot to pay homage to the town’s heritage. And finally, in 2013 the Port Vale crest was adapted for the last time to include a rehash of the 1956 crest along with historical references to create the crest we know and love today.

As seen across the stands at Vale Park, you can join in with the united feeling of Port Vale supporters by wearing the signature monochrome home jersey to their upcoming fixtures. Not only this, but you can also enjoy wearing their authentic football shirt while watching on adoringly from the comfort of your own home as your idols take to the pitch. Showcase your long-standing support for the Valiants now!

Over the years, Port Vale has seen only a handful of victories in the lower English football leagues, but none the less they have still gained a wide range of supporters from across the globe. They are currently playing in the League Two and placed 20th out of 24 during the 2018/19 tournament. However, their victories still warm the hearts of devoted supporters who are forever cheering their number on soccer team on win, lose or draw. Here are the Champions statuses awarded to the Port Vale football club since they were re-established in 1907.

Reestablished in 1907, Port Vale has partnered with a wide range of sports manufacturers to produce their kit. As explored below we can see that they most commonly have short contracts with manufacturers which don’t tend to last much longer than 3 years. However, their longest single contract was with Vandanel which spanned across 9 years. Their most remembered jerseys were those which were created by Valiants Leisure and Patrick/Vandanel as they were linked to the club’s successful history.

All of our Port Vale football shirts have been delivered direct to us from the respective manufacturer to ensure that we are providing our customers with the authentic soccer wear for their beloved team. Place your order online or over the phone now and take advantage of our express global shipping methods now. We also operate a click and collect service at our warehouse too!