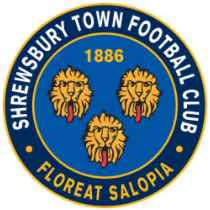 Looking to buy the official football shirt for Shrewsbury Town? Well you have landed in the right place. Here at Soccer Box we stock the latest Shrewsbury Town Football Shirts for the 2018/19 season. We are supplied directly by Errea, but stock is limited so order your Shrewsbury Town home jersey before we sell out.

Shrewsbury Town is an English football club situated in Shropshire near the England-Wales border. The club was established as far back as 1886, but did not officially join the English Football League until 1950. Shrewsbury Town’s history has been confined to the lower tiers of English football, they currently play in League One, which is the third tier.

The low point in the history of Shrewsbury Town was a single season spent in the Conference Division, 2003/04. Since this point the club has slowly regained strength and league position working their way through League Two and into League One. The 2017/18 season was a particular highlight for the wearers of the Shrewsbury Town jerseys. The club finished 3rd in the league, making two appearances at Wembley Stadium:

The squad may have failed to secure promotion of the EFL Trohpy however, the team and supporters alike go into the 2018/19 season full of hope for the future with new manager John Askey at the helm.

In 2007 Shrewsbury Town took possession of their new home football stadium, New Meadow. New Meadow is a purpose built ground with a capacity of 9,875 fans, with the club averaging around 5,500 supporters clad in their Shrewsbury Town shirts, kit and accessories for every home fixture.

Other stadiums used by the club since their inception are as follows:

Development of the Shrewsbury Town Kit

Today Shrewsbury Town football club instantly conjures the image of the iconic blue and amber vertical stripe home shirt, however, this colour scheme was only introduced in 1978. Prior to this time the Shrewsbury Town jerseys have featured an array of styles and colour schemes. Blue has always been a colour featured in the clubs kits with plain blue shirts, blue and white vertical stripes, half and half as well as quartered designs featuring at least once in the clubs history.

By the early 1970’s with Umbro as the Shrewsbury Town kit manufacturer the blue and amber colour scheme became mainstream but it was not until 1978 that the alternating vertical stripes were introduced. The stripes are well known and loved by fans, but despite this the team has had an array of kits over the past 30 years with varying combinations of blue and amber.

Since taking on the role of kit manufacturer in 2015 Errea has stuck closely to the popular striped design. The 2018/19 Shrewsbury home shirt has full stripes with plain blue sleeves and white trim around the neckline. This jersey is a must for every devout Shrewsbury Town supporters.

Shop for your Shrewsbury Town football shirt here at Soccer Box. We are based in Stafford, and did you know that you could save 15% on your purchase if you opt to collect your jersey from our warehouse and use code COLLECT15 at checkout? Hurry stock is limited so order your shirt today, for delivery or collection you can be guaranteed a genuine jersey and fantastic service when you shop with us.