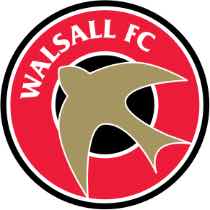 Walsall football club play in the third tier of the English League, and you can shop for the official Errea shirt right here at Soccer Box. Yes you have landed at the Walsall football shirts shop, where you will find the latest jerseys for this club that is based in the West Midlands. The brand new Walsall home shirt for 2018/19 in the latest edition to our online store, so avoid disappointment and order yours today.

Established in 1888, Walsall football club has a long and storied history. The club was one of the founding members of the English Second Division. The Walsall jersey has never appeared in the top flight of English football, with the team currently playing in the third tier known as League One.

The iconic ‘home’ of the Walsall shirt is the Bescott Stadium, which is a purpose built stadium situated just off the M6 motorway in Walsall. Currently referred to as Bank’s Stadium for sponsorship purposes, this has been the home ground of Walsall FC since 1990 and, has a capacity of 11,300 supporters. The largest stand is dedicated to HomeServe the current sponsor of the Walsall kit, and accommodating 5,000 fans.

Prior to the move to Bank’s Stadium Walsall football club has resided at several other stadiums as follows:

History of the Walsall Football Shirts

Following the amalgamation of the two clubs the team was known as Walsall Town Swifts. They began by wearing red and white stripe jerseys, switching to burgundy then a stylish half and half red and white shirt. In 1893 the club became known simply as Walsall.

In the early days of Walsall FC the squad switched between various coloured shirts primarily based on the colour schemes of their founding clubs. From 1949 – 1945 pillar box red was the colour of the Walsall home shirts. In 1965 they introduced a white jersey, and kept that colour scheme until 1976. With the exception of 1986-89, the 2008/09 season the Walsall home jersey has since always been red.

Shopping for the Walsall Football Kit

In 2017 Errea took over the manufacturing of the Walsall kits, and from the 2018/19 campaign you can shop for your Walsall jersey at Soccer Box. We are proud to stock the latest home shirt in a full range of adult sizes.

Order online to ensure speedy delivery of your Walsall shirt, we are supplied directly by Errea guaranteeing that you will receive an official team jersey. Why not also sign up for our customer newsletter to receive exclusive special offers and discount codes. Did you know that we are based in Stafford, and you can collect your Walsall shirt from our warehouse, use code COLLECT15 to get 15% OFF any collection order.