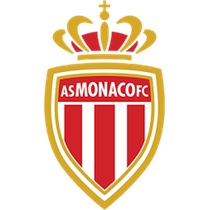 Thank you for visiting the Monaco Football Shirts and Jerseys store at Soccer Box. Here you can order the Monaco football shirt and show your support for this popular French Ligue 1 football club.

Monaco football club plays within the French league system despite, Monaco being a country in its own right. Being a small principality close to France the team has little option but to join the French football league. Monaco has been successful and is disproportionately supported in comparison to the size of Monaco itself. The Monaco jerseys enjoy a vast popularity in Monaco but are also sought after in France and around Europe.

Shop for the Monaco jerseys here while stocks last!

Macron designs and manufactures the Monaco football jerseys. The Monaco football shirt has been red and white for the clubs entire history. The red and white shirt is designed in a stylish diagonal half and half pattern that is iconic of the small club. The Monaco away football shirt color has changed frequently over the seasons. Blue has been the most often used color, however, white, yellow and red shirts have appeared over the years.

The centre of support for Monaco football club is based at their stadium the Stade Louis II. The original stadium opened in 1939, it was rebuilt on reclaimed land in the 1980’s. The new stadium that opened in 1985 has a capacity of 18,523. This is an intimate stadium relative to others in Europe but in comparison to the total population of Monaco is sizeable. The streets of Monaco are flooded with Monaco jerseys on match day, as the locals get behind their beloved club.

Monaco has won the French Ligue 1, 7 times in its history, making it one of the most successful teams. They have also won the Coupe de France 5 times. As well as domestic success Monaco has regularly appeared in European football tournaments. In 2004 they were runners up in the UEFA Champions League ensuring increased recognition of the team and in increase in sales of the Monaco football shirt.

Collecting football shirts and jerseys is a popular hobby for many football fanatics. Have you got a Monaco football shirt in your collection? If not Soccer Box is the place to shop.

If you are a collector bookmark Soccer Box now, we stock a vast selection of football shirts and jerseys for teams around the world. We are sure to have a football shirt that you don’t have in your collection. Browse our store and don’t miss the special offers pages for a fantastic selection of shirts.