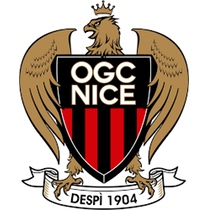 OGC Nice has a long and storied history, originally founded in 1904 and named Le Gymnaste Club de Nice. The sports club initially concentrated on gymnastics and athletics but has now developed into a successful association football club that plays in the French Ligue 1. In recognition of their long history and success we are now stocking OGC Nice football shirts in our online store. Take a look at the jerseys available and order online for fast worldwide shipping options.

OGC Nice was one of the founding members of professional football in France, and have been successful winning the top flight Ligue 1 on four occasions. They have also lifted the Coupe de France trophy three times to date. All of OGC Nice’s Ligue 1 victories came in the 1950’s, and this was without doubt the most successful period in the clubs history. They subsequently dropped down the tiers of French football to their lowest point in Ligue 3 during the 1980’s.

Subsequent seasons has seen OGC Nice climb their way back into the top-flight of French football, with a return to Ligue 1 in 1994, where they have since stayed. In recent season’s the highpoint for the club was winning the Coupe de France in 1997 and finishing as Coupe de la Ligue runner-up in 2006.

Macron has taken over as the kit supplier for the OGC Nice shirts as of the 2016/17 season. Burrda was their previous manufacturer until the club signed this new football shirt deal with Macron, which will see the OGC Nice jerseys feature the Macron logos for at least the next three seasons ending in 2019.

The traditional colours for OGC Nice are red and black. Macron will produce home, away, third and training kits for the club that will all be based around these strong colours, which symbolize patronage to the club and are worn passionately by supporters. Take a look at the latest OCG Nice shirts right here in our online store.

The symbolic home of any football club is its stadium and OGC Nice had built a long history at the Stade Municipal du Ray from 1927-2013. In 2013 the club moved to it’s new home the Allianz Riviera. The stadium was completed as part of France’s infrastructure for hosting Euro 2016. The Allianz Riviera has a capacity of 35,624 and attracts fans sporting the OGC Nice jerseys on match days.

When shopping for your OGC Nice football shirts, and other kit or accessories for Ligue 1 clubs you can ensure you are getting official merchandise when you shop with Soccer Box. We are supplied directly by the manufacturer, and sell genuine shirts, kit and accessories. Our shopping cart offers secure payment, and for your convenience we offer UK and worldwide delivery options. Use the menus to browse our store and place your order online today.