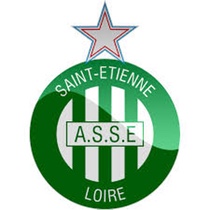 Shop for your Saint Etienne football jersey while supplies last!

They have won a record 10 French Ligue 1 titles, however, their most recent title was in 1981. Saint Etienne has also won six Coupe de France titles, most recently in 1977. The most recent trophy celebrated by fans wearing the Saint Etienne football shirt was the clubs only Coupe de la Ligue title that they won in 2013.

Saint Etienne is often referred to as ASSE by the French football league. They secured a 5th place finish in the 2014/15 football season and are hoping to edge their way back toward the top-spot, and the glorious 1960’s and 1970’s when the majority of the clubs victories took place. Here at Soccer Box we stock the official Saint Etienne football jerseys, and you can order yours online using our secure shopping cart.

The Saint Etienne home stadium is Stade Geoffroy-Guichard. This football ground has a capacity of up to 42,000 soccer fans. On match days the stands are filled with the green and white hues of the Saint Etienne home and away football shirts. The clubs fans are renowned for their loyalty, despite several dips into the lower tiers of French football since their glory days.

Saint Etienne has a main rival, the reason for this rivalry is primarily local proximity. However, the rivalry is mainly good natured, although local derby matches can be hard fought with both squads vying for victory over their neighbours.

Shopping for a Saint Etienne jersey is easy at Soccer Box. We have a wide range of UK and International shipping options enabling you to shop for your favorite football teams shirts and jerseys from anywhere in the world. We pride ourselves on the extensive range of soccer jerseys and team merchandise that we have available.

Browse our online store and shop for Ligue 1, Premier League, La Liga, national and many other league football shirts. In addition to the large collection of official soccer jerseys available we also stock training kit and accessories for many of the football teams.   If you have an interest in any of the other French clubs then check out the French Ligue 1 to find your desired team.