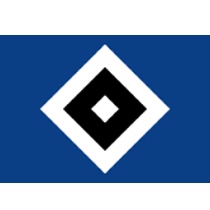 Thank you for visiting the Hamburg Football Shirts and Accessories shop at Soccer Box. We stock a selection of official club accessories and merchandise that is in stock and available to order. Hamburg officially known as Hamburger Sport-Verein is a German sports club. As with many sports clubs in Germany the major element of the club is the bran

Hamburg sports club was initially established in 1919, it was founded from the merger of 3 other clubs. Hamburg has been one of the most successful clubs in the history of football in Germany. They are the only team to of only played in the topflight and have never been relegated. The now famous, Bundesliga team was formed in 1963 and has featured the jersey and merchandise every season.

Whether you are a long established fan or new to the Bundesliga shop for your shirts and accessories at Soccer Box now!

The club tops feature a distinctive color scheme. The home tops are usually white with blue trim. The tops are teamed with red shorts and blue socks to create a striking and imposing kit. Unusually, the home kit colors contrast with official club colors. Blue, white and black are the official colors of the club. The diamond crest that is used on the kit, accessories and merchandise features these official club colors.

As one of the longest serving and most well known German clubs Hamburg has a large and loyal band of fans. The shirts and accessories sell well in the local area, across Germany and around the world. Hamburg’s Volksparkstadion is packed with fans sporting their jerseys, accessories and merchandise during every home game.

As well as the shirts, accessories and merchandise are popular with fans. Official merchandise and accessories are perfect for identifying yourself as a fan and showing your team support at the match and every day. You don’t need to attend games at the Volksparkstadion, or even live in Germany to show you are a fan of Hamburg. Simply order the jacquard scarf from the Soccer Box store and use it in cold weather and while the watching the match.

Football kits and accessories are a great choice for supporters of Bundesliga soccer. Bundesliga is the topflight of soccer in Germany and is the home of tops, jerseys, merchandise and accessories for some of the best clubs in the world.

Soccer Box is the number 1 place to shop for your Hamburg football shirts. Whether you follow 1 specific club, follow your national team or collect football strips, accessories and merchandise for a wide variety of teams, Soccer Box has a massive selection of official jerseys and merchandise.

FILTER
Now Shopping by
Clear All
Shopping Options
Category
Season
Size
Compare Products
Compare
Clear All
You have no items to compare.