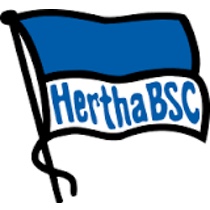 Hertha Berlin, being one of the oldest soccer teams in Germany and forming the German Football Association is what makes the Hertha Berlin Football Shirt such a timeless investment. Pledge allegiance to this classic club by shopping through our impressive range of the latest and previous soccer clothing adorned with Die Alte Dame’s crest.

Ensuring that we are able to bring 100% satisfaction to our customers worldwide, our stock has been sourced straight from the clubs long term kit supplier – Nike. Therefore we are able to confidently versify the authenticity of our sports clothing collection to give you peace of mind. We also offer a selection of international rapid shipping services to ensure that fans across the globe can don the latest attire with pride.

Since 1999 Nike has been the sole football kit designer and supplier for the Hertha Berlin soccer team and their fans. This means that Nike was responsible for producing the home, away and training sportswear for the German team. However, in 2015 their contract was extended again with the American clothing brand for a further 10 years – taking them to 2025. As a result of this extension, this partnership in particular is the longest collaboration the soccer club has ever done.

However, prior to their journey with Nike, Hertha BSC has also worked with a selection of other companies for their clothing collections. Returning to Adidas regularly, we can see that these were a favourite over the years. And they have also partnered with Puma and Reusch too between their contracts with Adidas. Below is a brief breakdown of these partnerships since the 1970s.

The story behind the appearance of the signature Hertha Berlin home football shirt we know and love today is rather interesting. Back in 1892 the Berlin Football Club was first established, however they sought to improve on their naming and colouring in the early years. This is where they adopted the name BFC Hertha. Hertha being the name of the German fertility goddess, but it was also the name of the steamship one of the founding members rode with his father. Along with this significance, the boat also played a part in the colouring of the home kit as they were mesmerised by the white and blue smokestack of the ship.

From the day it was first designed, the Hertha Berlin home shirt has forever been evolving. However, the most prominent thing about the shirt’s style is that it features vertical stripes of block colour. Although manufacturers have tried to advance on this by changing the direction and size of the stripes, they always seem to revert back to the much-loved block appearance. And this is what makes the shirt such a popular choice as every season has a slightly different take on the simplistic design.

This home shirt can therefore be seen all over the Olympiastadion which seats just under 75,000 spectators in the stands. Therefore you are guaranteed to see a large array of these home jersey styles during the club’s fixtures at their base grounds.

Along with this fantastic history of the production of the home shirt design, the away kit also has a significant meaning behind it. Most commonly the colouring of the away strip is red, white and black; however they have also included blue into the mix in recent years. This specific palette resembles that of the Berlin flag which is white and red with a black bear in the centre. Therefore by incorporating this colouring into the away strip for the club, it was a way for them to pay tribute to the reunification of Germany in 1990. Prior to this the flag was used to identify the west of Berlin, but as of this milestone in Dutch history, the flag is used to identify Berlin as a whole.

Although the history of the football team is significant, and the appearance of the attire is timeless, the main reason you should purchase the Hertha Berlin home jersey today is because of the player’s successes. Showcase your support and pride for this long standing club by wearing the replica jersey to the stars to pay homage to their impressive performances.

The most recent win for the Hertha BSC squad was in 2013 when they lifted the 2.Bundesliga trophy for a third time overall. This was a milestone in the team’s history as this saw them promoted to the top flight Bundesliga where they continue to thrive.

Here is a breakdown of all of the awards won by the Hertha Berlin soccer squad over the years:

As well as the home shirt you are also able to buy the Hertha Berlin away jersey too from within this category, so take a look through our products and find the best fit for you! With a selection of adult’s sizes available, you are guaranteed to discover your ideal fitting, or give us a call and we will happily assist. Never fear, our collection of sportswear is all 100% official with authenticity assured to provide you with an optimum level of satisfaction upon receiving your purchase.

We also acknowledge that supporters of Hertha BSC are situated all over the world as the historic establishment of the team has captured the hearts of many globally. Therefore, thanks to our vast array of international and UK shipping services, you are able to have your jersey delivered to your doorstep and be in your hands rapidly after dispatch. Be sure to also sign up to our newsletter to be kept in the know of whenever sales are occurring along with special discounts to use towards your future purchases.